Call of Duty: Ghosts – A Hill

In Call of Duty: Ghosts there is a multiplayer map called Prison Break, and I guess that there’s some reason that it is called that, though I can’t tell you what it might be.

The top-down view doesn’t do the map justice, and by that I mean that the map is utter trash. Sightlines are scattered everywhere, and the map feels like design was thrown to the wind for some kind of “realism” that entails the player always checking behind herself instead of moving forward. I’m biased, of course, because I think Call of Duty multiplayer is best when you’re playing the most arcadey shooter possible–the multiplayer of Modern Warfare 2, with its knives and fast running, might be the pinnacle of my competitive online experience.

I say all of that to intimate that the map definitely isn’t my favorite, but it does have one single great feature.

Contained in the red box is what I call “the hill.” It is what is sounds like. The upper right of the box is a pathway that leads up toward the center of the box–the incline is pretty steep. People generally move from the bottom to the top along the blue arrow–you could also move the other way, from the top of the hill to the bottom, but I don’t see it happening as much; the flow of the level doesn’t work that way.

The hill is interesting because of the sightlines that it affords the player. I’ll done a little mock up of what I mean: 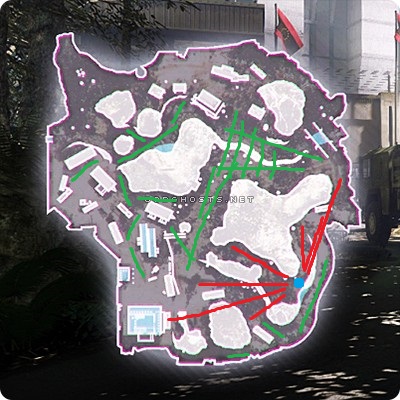 If you’re standing at the optimal position on the hill (the blue dot), you can cover quite a lot of visual area with your shooty machine. The rest of the map is a nice mixture of medium and short sightlines, but they rarely converge in such an optimal way. To the north and to the west of the hill, you can see there’s a lot of convergence and “lanes” that players can be forced into, and while they also possess a multitude of sightlines in a compact zone, the openness of the area often makes for a killing field scenario where players run in and die over and over again.

As of right now, all I’ve really said is that the hill is optimal in that controlling it (especially with another player) really gives you access to sightlines and therefore some competitive advantage. That doesn’t really make it weird or anything; in fact, it is constructed to be a spot to fight over, a concentration point of struggle in team deathmatches or lone wolf rounds. Not only can you rack up kills by seeing enemies and reacting to them before they see you, but you are controlling one of the key methods of moving east and west on the map.

I find the design of this strategic zone beautiful in particular because of the way that the hill itself operates. What I am talking about specifically is the slope to the north of the blue dot, which you can see here.

Let me use my HD BLU RAY NEXT GEN GRAPHICS to do a little parsing: 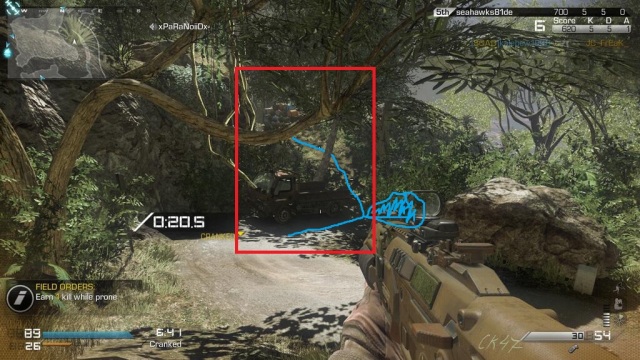 The blue path is where the other team can run through (the blue bag thing is small side area). As you can see, standing on the slope itself allows you to really control this area and generally get the drop on players who are barreling through there at like mach ten. 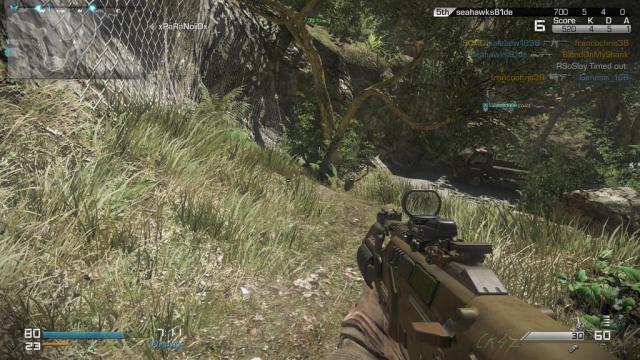 This is me backed up the hill about ten feet from where I was in the previous shot, still in an optimal spot to control that weird little red box that I drew before–notice the position of the brown truck still in the right side of the screen.

So, finally, what I think is beautiful here is the slope of the hill. It is steep, so much that if you’re not angling the camera toward the ground as you’re walking down the hill that you can totally miss enemies that are standing at the base. I think that the base desire of the player is to look out and cover that truck–enemies are going to come from that tight corridor between the back of the vehicle and the edge of the map, after all. There’s an expectation that the action, and therefore the danger, is coming from there, and so you’re going to ignore the bottom of the hill. This also means that you’re keeping your vision parallel to the ground at the top of the hill rather than the ground on the steep slope, fundamentally cutting off vision of the bottom of the hill.

In other words, player expectation and desire is being used to occlude somewhere the player should be looking. Better other words: the player thinks she is making a good decision, but she is really being tricked into making a bad one through the design of the slope.

That’s not all the work the physical design of the slope is doing, though, because it also actively works against the player who is moving up toward the top.

This is the view walking up the slope, looking almost exactly at the position of the last few screencaps. As you can see, the point where the slope evens out to flat ground at the top is obscured by the steepness of the slope itself–there’s a hard, material limit to sight here, and moving “over the top” is very dangerous here, requiring the player to either use a tactical grenade or just move super slowly.

The beauty that I find in the design of this one little piece of the level is based on its materiality and it determines how a player can operate in the world. I snarked about “realism” earlier in this piece, but this is actual, operational realism. It coheres to how the player can interact in this world; it unites the seeing player with her avatar and the meshworld that surround that avatar.

This entry was posted in Video Games and tagged call of duty: ghosts, multiplayer, realism, video games. Bookmark the permalink.
Loading Comments...
%d bloggers like this: