The Most Wonderful Part of Remember Me

Remember Me came out earlier this week and I marathon’d it over the last two days. I don’t have a good read on the final product–my short review is that the first third of the game is amazing and it really tapers off from there.

The reason that I’m making this post is that an incredibly beautiful thing happens around the 70 or 80 minute mark. I talked a little bit on twitter how the androids/gynoids of Remember Me triggered some kind of teary aesthetic sublime for me, but that was a creeping feeling that sat around me like a cloud for the entirety of the game. The moment that I’m talking about wasn’t like that–it only happened once, and when it happened I smiled the biggest goofy smile. Then I did it over and over again.

Nilin, the protagonist of the game, is climbing along some ledges in the upper levels of Neo-Paris. It is typical Assassin’s Creed and Uncharted mashup climbing, Tomb Raider-style, and my focus during the section was less on the climbing and more on the sweeping Neo-Parisian landscape that I could sometimes see in the background.

Then Nilin jumped through a sign. I made a gif–watch:

You can also see it in this video right after the 29:00 mark.

I like this because it is the kind of realism that Robert Yang was talking about in his Let’s Play video of the first room of the first Half Life. While I enjoy the environment design of Remember Me‘s Neo-Paris, it is mostly working on the level of Yang’s broken lightbulb–when you show me the Arc de Triomph in the middle of a slum with buildings all around it, I’m supposed to feel a kind of shock and awe; it is a cyberpunk future predictive realism based on the shared genre assumption that the future will be the same but a little bit more shitty. The “realistic” feel is coming from my relation to the genre, not from how the character is relating to the environment or how the environment is relating to itself.

I’m making a (hopefully) productive link here between Yang’s video and Daniel Morgan’s rethinking of Andre Bazin’s theories of realism in his “Rethinking Bazin: Ontology and Realist Aesthetics”. The short of Morgan’s argument is this: we associate Bazin with a naive realism in film that privileges long shots and a strong indexical attachment to the physical, material world. Morgan’s intervention in the past 60 years or so of film people reading Bazin is that a close reading of Bazin’s body of work reveals that he was less concerned that naive realism and much more concerned with an internal consistency of the world. Bazin doesn’t want a 1:1 reproduction of world on film. Instead, there is a desire for a realism of relationships, of parts to wholes, of actors to actors and objects to objects.

When Nilin jumps through the sign, an event that only occurs in this one moment despite the game being filled with ledges and billboards, I really felt the internal relationships of Remember Me were being demonstrated. It was real.

I will probably have a proper review of this at some point? Who knows.

Here’s another ZOOMED IN PICTURE of the jump from the other direction. 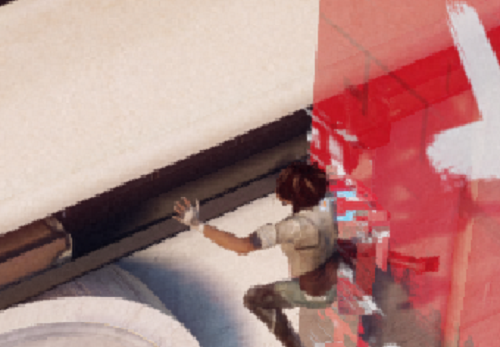 10 Responses to The Most Wonderful Part of Remember Me