Some Preliminary Thoughts on Spawn

For some reason I thought it would be a good idea to read the first fifty issues of Todd McFarlane’s Image series Spawn. You might be familiar with the material through its strange saturation into American culture via action figures, anime, the comics speculation market, and a fantastically terrible movie made in the late 1990s in which John Leguizamo plays a demon clown.

I haven’t been able to read all of the issues yet. In fact, I’ve only read three or four, but nonetheless I already have some thoughts about the series that I want to get down in preparation for the long haul. In no particular order:

1. Spawn is horribly written. The protagonist, Al Simmons, is a man who died, went to hell, and made a deal with the devil so that he could return to Earth in order to…something that isn’t very clear yet. He returned as Spawn, the masked semi-superhero who is, like, so 90s. 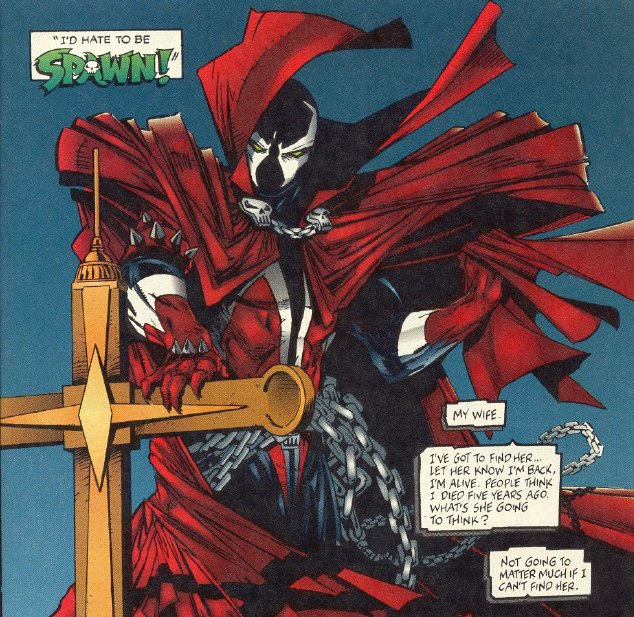 Every issue so far has followed a very specific plotline: Spawn is angry about the deal he made, he does something vaguely action-oriented, and then laments the fact that he is a demon thing now (instead of a human) who his wife could never love. Let me tell you: Al Simmons misses his wife. Spawn contains Harrison Ford levels of lamentation about his wife. On its own, that isn’t something to mark the writing as bad–the loss of a loved one, the sacrifice of normalcy and life, all of that could be interesting (if heteronormative, masculinity-in-crisis-y).

McFarlane’s strength isn’t writing, though, and so reading the comic literally becomes a process of waiting for the next lamentation that Simmons’ life is no longer what it used to be. An interesting concept that could be profoundly tragic is robbed of any emotional resonance because of how by-the-number it feels. On some level, it is like the ten page rule as applied to comics–McFarlane seems to think that the reader can’t hold Spawn’s motivations is her head for more that 10 panels max.

Check out this sweet exposition from supersatan: 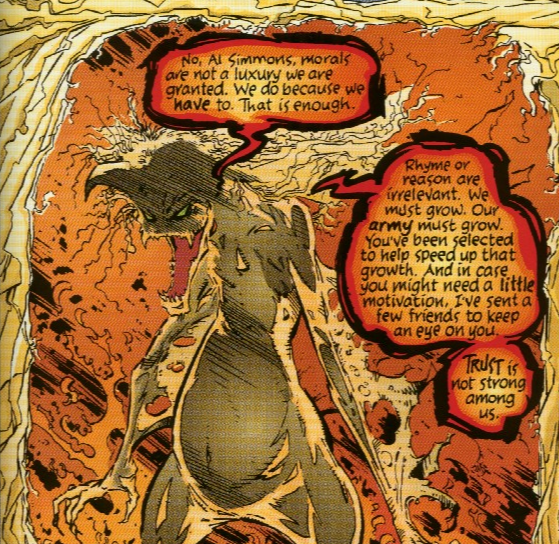 2. The design is sometimes really nice. Check out the following panel:

That said, just as often as McFarlane does something interesting, he does something either boring or blatantly ripped off. There are multiple devices and panels that are ripped straight out of Frank Miller. The narration is delivered via television talking heads in a very network news, The Dark Knight Returns kind of way (the composition is much worse.) There are also explicit references that hit a little too on-the-nose: Spawn on a church, Spawn backlit with lightning strikes, and so on.

What has actually struck me about the visual style, both compositionally and artwork-wise, is how hurried everything seems to be. It makes sense–the Image partners all have a rough style that looks hurried (and is sometimes great for that quality.) I guess my limited interaction with the Image books from that time period has distanced me from the absolute lack of design in favor of just getting all of the story elements onto a page. Rarely does it seem like a page was designed at all, but rather McFarlane just started at the top left of the page and drew until he ran out of room. Panels are ignored or broken or brought in at convenience.

All of this lends to a strange communication of affect or emotion. It seems like McFarlane is basically saying “who gives a shit?” with every page, and I really feel it coming through to me. I look at it and say “well, that’s comics, isn’t it.” That’s a poisonous thought, and it makes me wonder how much of the bubble was less about economic accumulation and explosion and more about a nihilism surrounding the comics themselves.

3. Al Simmons can shapeshift from Spawn into a human form. That form is a white “beach bum” standard comics dude for the time period. Al Simmons is a black man. 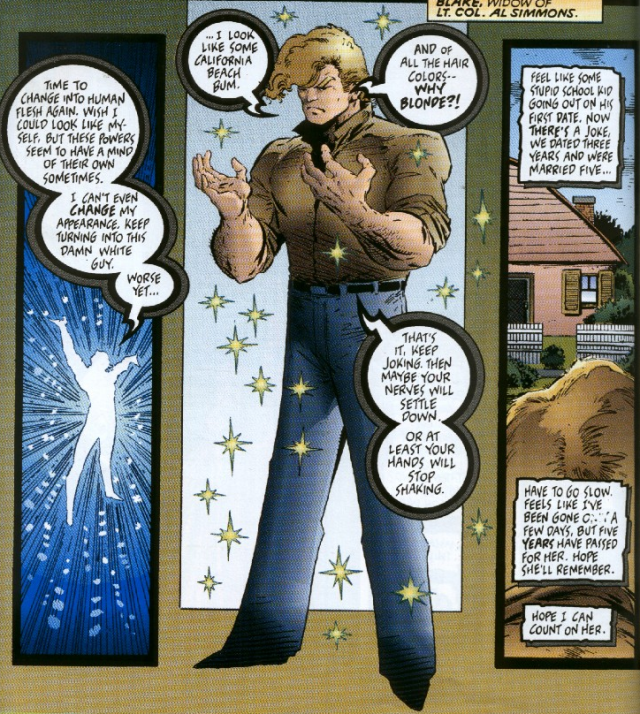 I think this is actually a really interesting turn in the comic: it is used as a punishment, a way of alienating Al from his humanity, turning him into a generic person of another race. I assume this is also meant to deprive Al of “uniqueness,” which is a little bit racist in that is exoticizes blackness, but it is hard for me to condemn McFarlane’s attempt to create a character who isn’t a white person like 97% of comics characters.

That’s all I have so far. There will be another post when I have read more. Hopefully the comic will get better! Protip: I bet that it doesn’t.

1 Response to Some Preliminary Thoughts on Spawn