Why is Grand Theft Auto V So Conservative?

This post doesn’t have any spoilers that I am aware of. 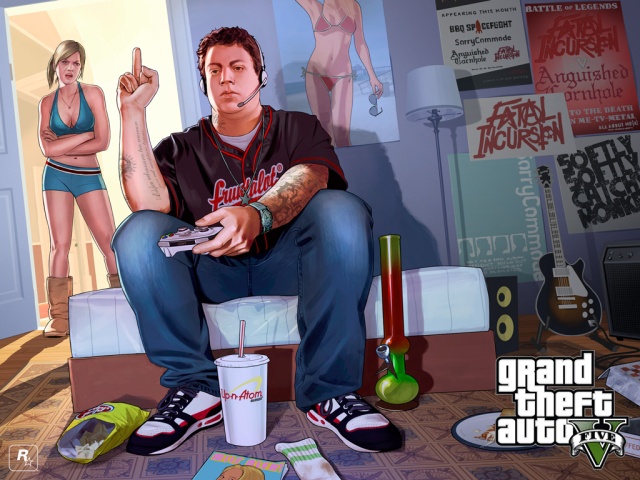 I’ve played something like ten hours of Grand Theft Auto V and while I don’t feel like I have a good read on the structure of the game, where it is going, etc., I do have another feel: boredom. I have mostly been bored.

There have been some great moments–switching between characters on a mission, the heists, riding an ATV, playing tennis. Mostly, though, it has been a great morass of driving around and doing very predictable, dare I say GTA-style, missions. Most have lacked excitement. “Go here,” the game says, “and kill this guy.” Or even worse: “Go here and do a fine-grained and intensive yet utterly unexciting task like towing or dockworking.” This isn’t how I want to be spending my stimulation simulation time.

This past summer I played some Grand Theft Auto III. It holds up as well as you would expect. The control scheme, like most of the control schemes from the early PS2 era, is fumbling at best, and I’m honestly surprised that I was able to beat that game as many times as I did when I was a #teen. And I did beat that game, over and over again, playing through every mission and collecting every secret package and tracking down every weird internet rumor that I could about the game. If you can fly the Dodo all the way to the first island, or you can purposefully glitch into Blue Hell, then anything could be possible.

“Anything could be possible” is probably the best summation of my memories of GTAIII. I didn’t understand how games were designed and built then, being a #teen, and so I had a wild-eyed acceptance of everything I was experiencing. I also thought it was amazing for all the things you could do, including running down pedestrians, murdering rival gangs, and doing sick jumps. While today that game feels painfully limited (you can’t even swim!), at the time it was amazing, and I have fond memories of the experience.

When I fell in love with the idea that “anything is possible,” I also became deeply attached to the object that gave me that “anything”. I didn’t want to give up the world, the possibilities. More importantly, I didn’t want to give up the chance that we could get more but better in the future (which Vice City eventually did give us). These feelings on my part were partially politically oriented. To my young mind, it seemed like what I enjoyed doing with my free time was under attack–Jack Thompson and the various legislators who had, and have, made it their pet project to “protect” children from “excessive” media were spinning up on the topic of video games (yet again) just as I was really settling into “my” world [Jacked is a good book on this. I had my problems with it, but the sections on Thompson are great.]

So I went to ground. I doubled down, as young men do, on rhetoric about free speech and censorship and media effects. I learned about the history of the arguments around the topic. I read up on polemics written during the birth of the novel, film, radio, and television. I became a small-scale “expert” on the topic so when teachers would try to pin me down on questions about violent representation I would be able to speak up.

At the same time, I spent every weekend with friends where we talked about how cool the characters of Grand Theft Auto III were. We fake-planned drug deals, talked about freedom, talked about how to get rid of bodies. These are all things that teen boys talk about, I think–we would have had these odd fantasies of fictional power whether we had video games or young men’s novels or just some sticks in the woods–but GTA gave us a particular frame to discuss it. The game was, after all, modeled on the real world. Then some of us went on to try for that absolute freedom, the dealer’s life, excessive violence in the face of our social situations and I really do wonder about pattern recognition.

I told that long story to give a sense of my investment in GTAIII back in the PS2 era. As I said before, I recently returned to the game.

It isn’t funny. It isn’t engaging. It is boring and a chore to play. More importantly, it always was.

The Grand Theft Auto series is only successful because of investment. It is the old Thomas Hobbes trick–you give someone an entire world and it is up to that person to make something of it. In the case of GTAV, the world that is given to the player is (intended to be) the largest possible world. Not only is this apparent in the physical location, as shown very clearly in the map size fetish around the game, but also ideologically. The game very clearly intends to allow as many people as possible to be part of the experience, and nothing gets at this better than the “humor” of the game; it is designed to be above all politics, the kind of “we make fun of everyone” that gives even the most virulent racist or sexist a way of escaping criticism. The radio is full of jokes–about conservatives admitting to being assholes during their campaign commercials, about liberals who claim that having a tv show makes you a liberal, about consumerism and Weasel News and everything in between. The sundry cast of characters the player meets in the game works similarly: the paparazzo who has to get the scoop and casts his blatant awfulness in the language of a public good, the FBI agent who demands a torture for the sake of torture rather than to get information, the yogi who preaches selflessness and concentration while demanding that a customer push her butt into his crotch. By making fun of “everything,” GTAV is trying to convince us that it is above any real commitment to an ideology.

I said a few words ago that the game “very clearly intends to allow as many people as possible to be part of the experience,” and I want to follow it up with “the game clearly fails at doing so.” The very attempt to speak from the position of the God’s eye view, somewhere away from ideology, is a guarantee that you are enmired in it. The game is so deep in casual and explicit sexism and racism that it can’t see it, let alone be critical or above it; oppressive politics is the air that Grand Theft Auto V breathes. 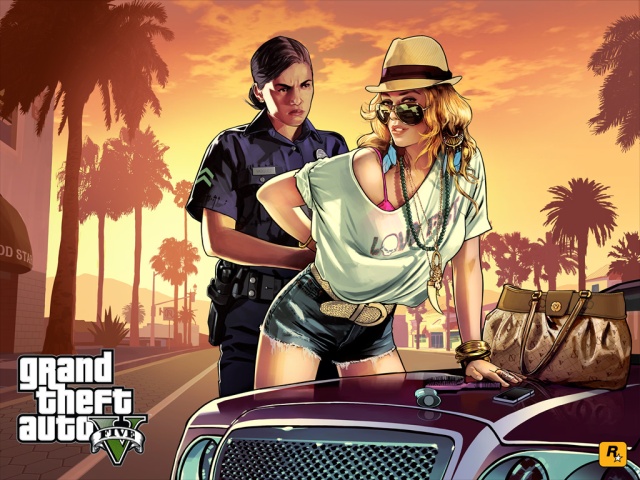 So why is Grand Theft Auto V so conservative? I don’t mean that in the sense of the political party, although they’ve taken that moniker on for a reason, but rather why is its politics so regressive, racist, and sexist? Why has “doggy style” sex been a visual joke twice in ten hours? Why are two of the primary narratives “black man trying to struggle out of the hood” and “white successful criminal,” both of which have been rehearsed over and over again in media?

I think part of it is a time issue. The political moves of Grand Theft Auto V make a lot of sense in the context of the ever-more-sanitized late 1990s. In a decade where the body, the fetish, and violence were increasingly seen as the only aesthetic ways from breaking out of the “end of history,” Grand Theft Auto makes a lot of sense. Lampooning Democrats and Republicans on in-game radio hit so hard in 2001, but in a world where pundits and politicians are already sounding like parodies of themselves, these jokes don’t really land. When the world you’re creating as a parody is hardly distinguishable from the real world, the parody might as well not exist.

Another part, related to time, is that that core tenets of GTAV are no different than those of GTAIII: making a point by shocking people. When GTAIII came out, there was still power in that–MTV, independent cinema, and Marilyn Manson had all demonstrated that purposefully alienating parents was a powerful way to draw an audience. It worked–for many people I knew, GTAIII was just as exciting for its function as a “fuck you dad” as it was as a game. But in retrospect, the “shocks” of GTAIII weren’t shocking at all. They were the dominant culture repackaged in ethnic stereotypes, in homophobic jokes, and in misogynistic writing.

The Grand Theft Auto series has always been about selling our own shitty culture back to us and then explaining that we’re transgressive because we buy it.

What’s shocking after reality tv? What’s shocking after sex tape culture? What’s shocking when grisly and graphic murder is some of the most popular entertainment? This isn’t an appeal to something far away, to a long lost past, but a real question: what is Grand Theft Auto even doing anymore? To make its regressive politics seem progressive it has to project us into a past, or worse, create a strange fake version of the world where being a generally crap human being is seen as heroic. When we’re playing GTAV, we’re not experiencing a fiction of the present; we’re playing historical fiction, ideological fiction, where terrible and boring people can be thought of as progressive and interesting.

12 Responses to Why is Grand Theft Auto V So Conservative?