Assassin’s Creed uses the mechanic of blending in order to allow Altair, the assassin of the Holy Land in the middle ages, to hide within groups of monks and healers of the cities. For that first game, that’s as far as that mechanic goes; it is a scalpel-like application of a single ability in a game that is all about finite uses for specific abilities (as I’ve argued previously). 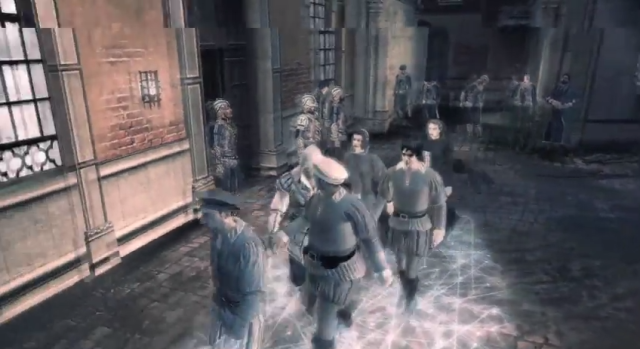 The blending with the monks in Assassin’s Creed is meant to be an illustration of the methodology of the assassin’s themselves, as undetectability-until-too-late is the primary mode of attack that the group uses throughout the series and in all of its various incarnations down through the centuries. Just watch the trailer for the first game to really understand this — Altair kills, runs, and then disperses himself into the public through the bodies of the monks (which also fuels a hatred of religious orders later in the game).

This small amount of backtracking is important to do in order to point out how Assassin’s Creed 2 changes the use of blending. No longer is it a single-use escape plan. Instead it is a crucial way of being in the world. Ezio is constantly walking into groups of people, or standing behind them, or touching them as he walks through their tight-knit groupings. We can imagine a step left out, a quick introduction, Ezio acting as if he knows these people in the short moment it takes to make sure that the guard you’re tailing to look away from you.

Altair disperses himself into a silent group who eliminated all of their personal characteristics in order to become just that — an order.

Ezio disperses himself into a raucous, heterogeneous group who are all functionally identical in their difference. They are not an order; they are a crowd.

This progression of modernity into a weird, radical sameness (or infinite replaceability) was as much a bugbear of the early Modern period as it seems to be now; people want to be understood as different, and that quest for radical difference has always eaten itself like some infinitely predictable Ourobouros (see: normcore). That’s old hat and well-trod ground, though, so I’m interested in where that can take us if we take blending one step further out and into the interface.

The interfaces of Assassin’s Creed and Assassin’s Creed 2 are significantly different in a few ways, with the most important (and the only one I’m going to talk about here) one being the use of synchronization as a health bar. Carol Pinchefsky explains:

In AC1, there’s no such thing as health or armor. There’s just synchronization—how close you (Desmond Miles) could faithfully recreate the actions of ancestor Altair. If you got hurt or fell off a building, you lost synchronization. Why? Because you suck, I mean, you weren’t as good an assassin as Altair, that’s why. The real Altair was too nimble to fall of a building, too stealthy to attract attention, and more lethal than Agent 47 (ooo, I went there). That’s why killing bystanders also cost you synchronization: You weren’t performing compatibly with the memory you were trying to retrieve. It’s a brilliant concept.

The sequels totally miss the point of how synchronization drives the first game. They introduce actual health, which could be restored with health tonics. In other words, medieval assassin Ezio actually does get thwacked upside the head by that Brute, no matter what you “remembered” him doing. (This means that Altair, who did not miss his jumps, is a definitively better assassin than Ezio. Ooo, I went there again.)

As Pinchefsky notes, the general gist here is that the health system moved from “how close is the player to the reality of history” to “how well is the player performing in a specific set of circumstances.” There’s a significant difference in these two things, and the difference is one of understanding how interfaces themselves work.

In the Assassin’s Creed model, synchronization works the same way as blending: how close can you be to an ideal?

In the Assassin’s Creed 2 model, synchronization also models blending, asking “how well can you fit into this heterogeneous set of conditions where the right way of doing things is not distinguishable from the successful way of doing things?”

The interface differences here are not merely different modes of dealing with the game. On the contrary, without parsing this out, I’m not sure that much of a difference is even felt between these two systems, especially since blending is such a small part of the first game in the series. What I believe is productive here is to think about what it means for the very mode of interacting with the game (me playing the game) to mimic the process of the assassin living in their world (Ezio becoming part of a crowd). These are what Alexander Galloway, in his The Interface Effect, calls “parallel aesthetic events,” or allegorical relationships between my interactions as a player and the character’s interactions in the game world.

This piece is long, so I will end with a description of those parallel events. I don’t want to drive home a conclusion–I don’t have one–but instead to open up how this process is working.

Ezio is following a target through a market. The market is filled with people wearing different clothing, carrying different things, sitting down and standing up, walking in groups of three to six, speaking and laughing. The target turns. Ezio, a person with literally superhuman powers of reflex and discernment, dodges into a group talking to one another. They have a short conversation. Ezio is no longer a unique superhuman, but instead a person with the fundamental characteristics of a nonplayer character. He is not a figure with a destiny. He is one of many bodies moving and shifting (and it is worth noting that the multiplayer modes for the series from Brotherhood forward depend on this becoming-NPC of the player character).

I am sitting on a couch. I am moving my thumbs and fingers in practiced motions in order to get Ezio to run from building to building in a particular line. Thousands of other people are doing the same thing at the same time. Then we are all doing the final mission. We are fighting the Pope. None of us are unique; we are all compacted into one heterogeneous mass with preserved difference and yet very little difference at all. We are all one of many bodies shifting and moving.

3 Responses to On Assassin’s Creed 2 – Interface