On The Max Payne Franchise 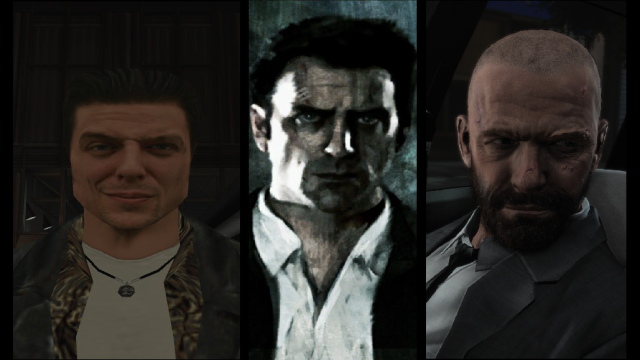 I’m in that weird interstitial period between semesters, and I have somehow managed to keep deadlines at bay enough to do something that I’ve wanted to do since last November: play all of the Max Payne games back-to-back-to-back.

What follows is a few words about each game.

The trick in my situation was that there was no trick, no matter what the movies tell you. No rules, no secret mantra, no road map. It wasn’t about how smart or how good you were. It was chaos and luck, and anyone who thought different was a fool. All you could do was hang on madly, as long and as hard as you could.

A list of things that happen in the first thirty minutes of Max Payne: the protagonists wife is killed by horror-film line spouting supermethheads, the couple’s child is murdered, Max Payne drives a train through a wall, and the player dies about five hundred times before she figures out how the combat mechanics actually work.

The narrative of Max Payne sets up the content for the rest of the series: Max begins the game with nothing to lose, becomes embroiled in a gang war that can only be resolved with a gun in each hand, and then realizes that he is involved in a conspiracy so large that it can’t be understood. With that knowledge, Payne decides that all he can do is sacrifice his body so that those benefiting from the conspiracy will pay for their crimes. A few hours later, the game ends.

Those are the broad strokes, and I have to say that Max Payne is merely serviceable in the macro; it is a third person shooter with an interesting story, but nothing special.

Max Payne‘s micro, however, is amazing because it is designed around the enclosed interaction. Because of what I assume has to be technical limitations, the AI of the enemies in Max Payne is not very good. In fact, when they catch sight of Max, they fire, run toward him, fire, and then repeat until they are five feet away going full auto with an uzi. To avoid huge swaths of enemies literally swarming the player, the game is designed in rooms; each one has particular enemy placement and a predictable pattern that the player comes to memorize.

I say this because I quick saved outside of every room and had to replay each and every one of them two or three times in order to not be killed. I developed a set of reflexes and a sense for signal reading–I ducked and dodged and bulletjumped my way through the game. In 2001, Max Payne was a pretty interesting and difficult game that allowed you to pretend you were a hard-boiled Neo from The Matrix; in 2013, it is a third person Hotline Miami without any hammer-shaped questions about our complicity in violence.

Max Payne is a puzzle game that you solve with bullets.

Like always, the dead had all the answers I was missing. It wasn’t that they weren’t eager to talk. Quite the contrary. The dead had plenty to say. And once they started, they would never shut up. Their words keep you awake at night.

This seems to be the most lauded game in the series, but I’m not sure why. It could be that there was enough time between the release of the first game and this one to allow people to remember the cool parts of the first game (bulletdodging, gritty crime stuff, Captain Baseballbatboy) and forget the punishing difficulty and nightmare sequences that featured a screaming infant with the occasional woman’s scream layered over the top of it.

The Fall of Max Payne continues the story. Max starts out doing his job, gets embroiled in a conspiracy, and everything spirals upward from there. I played through the game in (basically) one extended session, and I can’t really explain what happened; Max shot people, justice was had, and yet another woman that Max Payne loved was killed for a plot reason that is dubious to say the least.

I wasn’t so impressed by the second game, but I can say that there are two design choices that I enjoyed:

1. The final boss fight is a torturous encounter where the player has to shoot some super tiny pegs out of ceiling architecture. The first game had something similar–you had to use a sniper rifle to shoot some cables in order to kill a helicopter. This was something you had never had to do before in the game–there had been no precision shooting at any point in the game before that. Max Payne 2 follows this pattern, and just like its predecessor, tells you precisely fuck all about what you are supposed to be doing.

Cue fifteen full minutes of me running in a big circle and shooting my gun and screaming at the top of my lungs. I think that kind of final boss design is neat in retrospect.

2. There is a level where you control another character, Mona, instead of Max. It seems like a lot more care went into the design of those levels, and I thought that her animations were a lot more polished than Max’s. I would rather play a Mona Sax game.

I’m a dumb move guy. ‘Hey Max, we’ll drive out to the runway.’ No thanks, I’ll take the main entrance with a big shit eating grin on my face and let these assholes take turns trying to kill me. That’s my style, and it’s too late in the day to hope for change.

Years after the events of the previous game, Max is a washed up detective and a serious alcoholic. He’s a terrible shell of the man we knew before, who was already basically hollow. Then Max, in a drunken stupor, shot a twenty-something square in the chest. I saw it; shit, I pulled the trigger.

That’s the tone of the third game. It isn’t a strange semi-parody of crime fiction and generic tropes. It is full-on “take this social text seriously,” and playing it directly after the first two games was a shock. Seeing bad thing after bad thing happen to Max and the people who depend on him is supposed to bond the player with him, but toward the end of the game I started to see it as grim humor. You come into contact with Max Payne and your chances of being burned alive or shot to death go up about 1000%.

I also feel like the power of the first two games is that the player has very few tools at your disposal to deal with the problems that the game throws at her. When I play Max Payne, I feel like I am being forced to keep forward momentum. Hanging back just means that more enemies are going to path at me, and I can’t really do much other than run. This forces a particular style of play–Max has a gun in each hand, and you know damn well what you have to do to progress.

I guess what I am saying is that the conversion of the Max Payne games into a cover shooter slows down the pace of the game, and more than that it makes the player feel like there are actual options. You can choose to play defensively, only taking shots that matter, and slowly progress through each room until you hit an inevitable two minute cutscene where Max walks through a door to an aching voice over. In previous games, there were no options, no defensive maneuvers. You dodged and shot and died, or survived on a sliver of health, because that’s all you could do.

The Max Payne of New York City lives on that sliver of health all the time, and the moment of adrenaline where you barely kill three enemies with well-placed bullet time shots is absent in Max Payne 3. Every moment makes you feel like a hero; each set piece is designed to fill the player with a sense of power.

That’s not the Max Payne I know and love. My Max Payne is a paper thin thing that is 85% blood colored. He’s always one door away from being eradicated. The chunky meat man of Max Payne 3 is an entertaining bald version of my paper man; he’s an imitation. He’s boring.

This entry was posted in Video Games and tagged design, max payne, video games. Bookmark the permalink.
%d bloggers like this: