Yeti Hunter is a first person game where the player hunts a yeti. You begin standing in a large swatch of blood. Whose blood? Who knows? Equipped with the name of the game and a gun, you begin wandering. In most first-person games, you are equipped with sight; in fact, it is your main weapon. In Call of Duty, you ability to see to the edge of the map through your scope is critical to your ability to complete a mission. Yeti Hunter takes that away from you. There is snow, but there is also a very limited draw distance. Additionally, you are aware that there is a yeti out there somewhere, but you don’t know where. 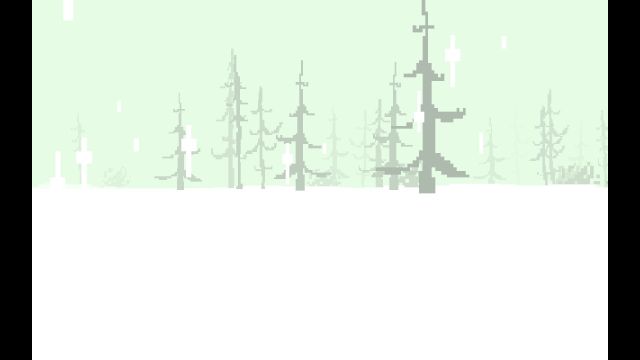 The music, by KOZILEK, haunts. It drones. It tiks. It also changes dramatically at night.

Up until that point, I was wandering, constantly looking behind myself, waiting for the shock of a yeti. Night clicked over and I was immediately frightened. I said “fuck” out loud. Visibility goes to nil. The world is grey and black.

Then I saw a yeti.

Yeti Hunter is horror because it makes you infinitely vulnerable. When the game limits the visual to a bare minimum, it triggers a flight or fight response in me. The beauty of that process is that there is no possibility of a fight. There is a specter that never gives itself a physical presence short of small glimpses.

When I was a kid, I lived out in the woods. And several times in my life, I had the feeling that I was being watched, or that something or someone was in the woods with me. Then I would panic and run home. Yeti Hunter generates the same effect in a digital space; it is a simulation chamber for generating your own fear. And then there are yetis.

There was a tingle up my back. I had to keep checking behind myself. Writing about the experience has made me turn back and look at the room behind me a few times, just to make sure. To make sure of what, I don’t really know, but it makes me feel better.