You can get all of Robert Yang’s Radiator games here.

I finally got around to playing the first two entries into the Radiator series of games made by Robert Yang (and maybe some other people?). The first two, “Polaris” and “Handle With Care,” are both about relationships. Let me say up front the both of them are brilliant, but I didn’t find “Polaris” particularly gripping, and I was often confused by its star-finding mechanic. I am not good at games.

Anyway, “Handle With Care” is a first-person neurosis simulator. The player takes the role of a man, James, in joint therapy with his partner. While a traditional game might have the player negotiate this session through dialogue choices, branching conversation trees, and whatever the hell else passes for “video game writing,” Yang moves “HWC” toward pure gameplay. You move inside the head of the therapy subject; you pick up boxes of memories and you place them inside cubby holes. You manage the inside of James’ (your) mind, making sure that everything is in its right place, nothing out of managerial sync with the world outside your head. 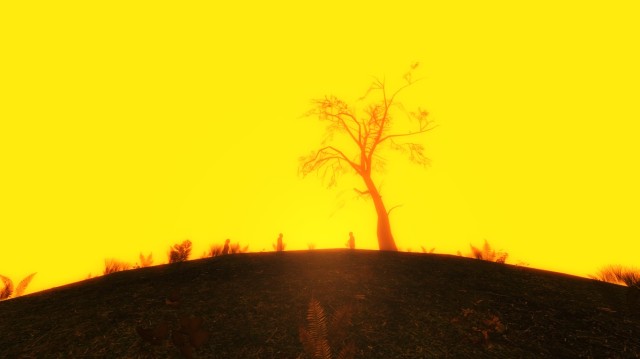 This image is powerful–it is a view of the internal world not as an innerspace or multiplicity, but as a warehouse that has a very particular factory function. It is the late capitalist understanding of the inner experience of every individual who has distinct, particular moments that can be processed, filed, and noted for collection late. Just like debt, or your birth certificate, or your Google search records–everything is codified forever in its right place.

The turn of the game happens when the player makes a mistake. In the mind warehouse, crates drop from a tube. You pick them up and move them to their cubbies. If you bang them up too much, they explode. The message is clear: if you don’t manage your traumas, your issues, in the best possible way, they return. Repression only works if you can maintain it, like a boiler. Because I am absolutely shit at video games, I immediately blew up a memory box and was flashed into some distant memory. It was a fight, maybe, or a jealous rage. 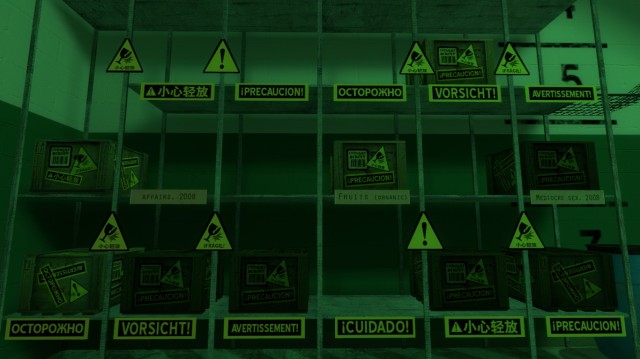 The memories aren’t rendered explicitly. They are translucent; you are only in them for a moment, you hear some dialogue, and then you flash away. They are skeletons of memories; they are like flashes from childhood, from before memory. I think this probably has something to do with the end of the game when your partner, David, mentions that he doesn’t know what life is like after divorce and that you and David had been together so long that he couldn’t remember what things were like before. Memories have so much weight that we have to repress them, or even more, eliminate them from our mind. But what were they to begin with? Impressionistic images that affect us, staged plays, snippets of words between two people in the heat of the moment. “Handle With Care” shows that these moments have destructive, or constructive, power; moreover, they impact us even in their absence. 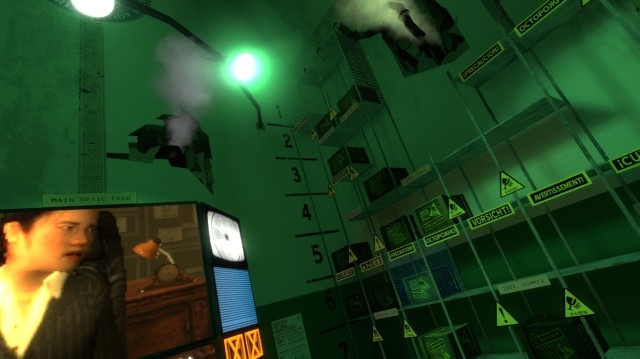 The ending of the game presents us with contradiction, but a brilliant one. Instead of repeatedly putting boxes in slots, we methodically smash them. The player explodes everything, over and over again, just enough times for it to be as repetitive and annoying as the audio loop or the memory box placement game. The movement away, to recovery, is just as difficult and full of problems as any other process. It left me unfulfilled and confused; it is genius design.

Overall, I think that Robert Yang is doing some of the most important work in video games today. He has an amazing ability to mesh game design with a message–I can’t imagine extracting a single part of the experience of “Handle With Care” and saying that it is the “core” of the game. The imagery, narrative, and gameplay are all necessary in order to communicate the full power of a person and relationship breaking down concurrently. I strongly encourage you to play it.

Some additional reading about “Handle With Care” is below:

Yang – “Not That There’s Anything Wrong With That” (Yang responds to the anti-gay responses to “HWC”)
Meer – “Shrink Rapt” (Rock, Paper, Shotgun review)
Khaw – “Interview with Yang”