I don’t know how to start this.

Truth: Red, White & Black is the story of the first Captain America. You all know about Cap, even if you don’t know anything other than his recent film and The Avengers. Captain America is a super soldier, given powers not through crazy genetics or aliens or magic, but through good old fashioned World War 2 science.

I have always thought there was something strange about this idea. A German scientist, defecting to America during the second World War, uses his designs and thoughts about human biology to craft a blonde-haired, blue-eyed superman who goes off to punch Nazis. There’s always been a hint of eugenics, of human experimentation, and of science-for-its-own-sake that made me uncomfortable. 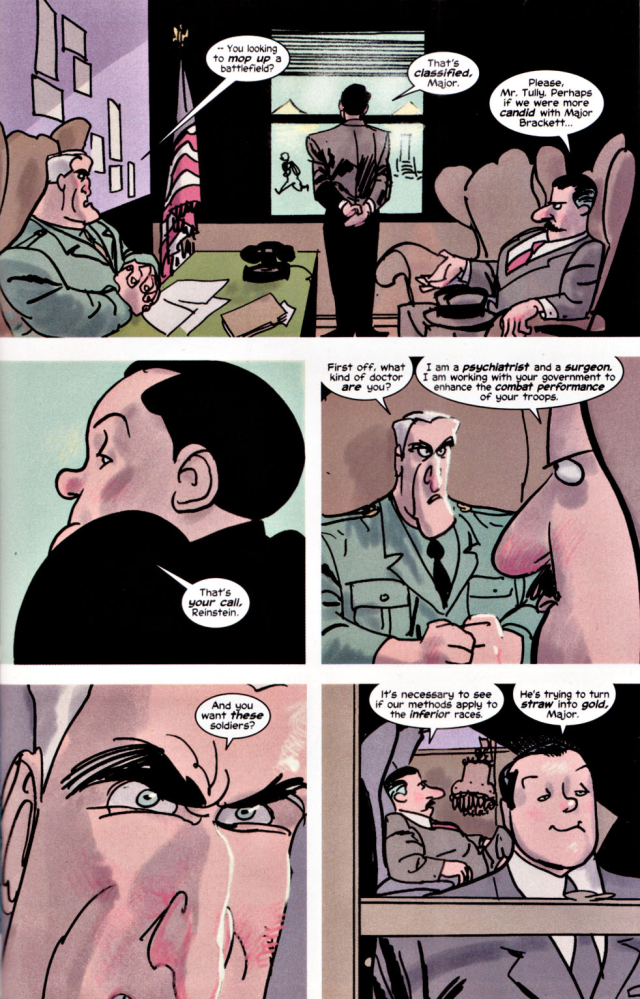 I have two simultaneous reactions to this. The first is horror, of course. The use of African Americans as test subjects for terrible things has a long history, and the kind of systemic racism that allowed for it fills me with sadness. There is no way of apologizing for it–there should be eternal shame about it. The second reaction is jaded, but it was “of course.” The history of technological development is one of destruction and genocide. The amount of suffering that goes into the construction of every iPod is unimaginable–why would the super soldier serum be any less?

There are many things that the reader is shown in Truth. We are explicitly made aware that the soldiers who were not admitted to the super soldier program were summarily executed. We are shown a man who explodes, his body literally pressed to physical limits by the muscle-growing serum. We are also shown the cold calculation behind that murder–now the scientists know how much serum is too much.

I could continue to tell you about the pain and suffering that is shown in the book. I could describe, in detail, the double violence of black men being reduced to mere weapons and then robbed of their lives. But that shouldn’t be the focus when I talk about Truth. The focus should be on the fact that these racist, fucked up behaviors are real. They have historical presence.

And they also show us that everyone needs to be aware of these things. White privilege still exists today, just as much as heterosexual, male, and a myriad of other subject position privileges that determine political existence in the world. Identity violences didn’t somehow disappear–they are still here, working their pain. I think it is something to be aware of, and there needs to be a realization on a personal level of the same kind that Captain America has. He realizes that his very act of existing in the world is a way of covering up and implicitly accepting an ordering of the world that eliminates and obfuscates minority positions. The grand signifier that is Captain America can only exist on the backs of crushed black bodies.

It throws the world in perspective. So I think Truth does good things. It is a song that has to be sung.

This is a secondary bit to the stuff above, but just as important: I think Truth has something to say about labor and who is supposed to get access to the the products of other peoples’ labor. Obviously these things are not equivalent, but there are parallels in the logic of the racist science machine and the Big Two comics companies. I don’t think there is a coincidence that the bodies of the African American test subjects are drawn in a very Kirby-esque way. It is a visual shorthand to make us think about the history of comics production, just like the comic itself forces us to think through the American history of race. Comics were made by people who had no choice–they signed by contracts because they wanted to make comics and that was all they were good at. Kirby was a person who wanted to make the things in his life come to life on a page, just like the men in the comic simply want to serve their country.

Both Kirby and the soldiers were abused for merely existing in the world and attempting to live life how they wanted.

For a better reading of Truth that is probably closer to what I should have written, check here.

Buy Truth if you want to. The name is changed for the paperback/HC.