You Buy It I Write It: The Polynomial

Is there a game you think I should write about? If you buy it for me on Steam, I will write about it. Check out the information here.

There was a flurry of activity when I announced that I would play anything that someone purchased for me. The Polynomial was actually the third game to come in, but because of time and space limitations, I gave it a go before the second one.

Do you remember when you could put a cd in the original Playstation and it would play and you could show some sweet visualizations while the music played? There were some bars that would hop up and down while the then-contemporary Marshall Mathers LP sold shit right into my teenage brain.

And during those strange days at the ending of the 20th century and the dawn of the 21st I would often flip through those visualizations that sometimes matched up perfectly to whatever weird emotion I was feeling along with The Wall and think “I wish this was a game. I wish I could just fly through this.” I’m not kidding–I would see these visualizations and the ways that they came onto the screen, both predictable and surprising, and dream about someone creating a Quake game that melded infinitely with the same tech.

I aged and visualizers changed and soon I could watch as many as I wanted with Winamp. Playing Caesar III with the sound turned off and Pearl Jam jangling away wasn’t the visualization mashup that I had been dreaming of, but it was something, and if the patterns and the desires and the emotions matched up, all the better. 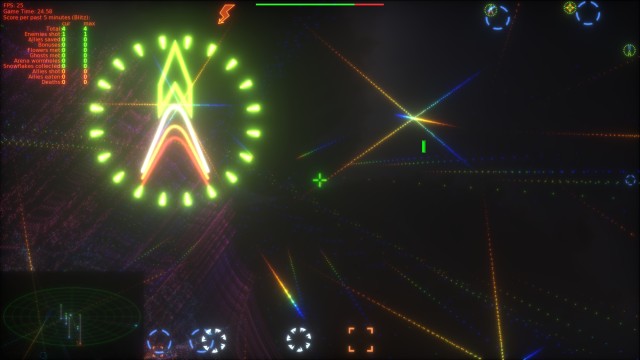 Now, years later, The Polynomial sits in front of me. The initial screen has information on it, but it is the kind of information that I cannot parse to save my life. It tells you to set the difficulty up very high so you can get points, but it doesn’t warn you that there is a reason that “very hard” is very hard.

I start the game. I launch into a world with distant glows. They are indifferent to me. They don’t do anything–there is a low technotronica score that doesn’t seem to mean anything. “I thought there would be music,” I think that then a giant black ball with teeth shoots me to death with glowing blue lasers.

This isn’t what I wanted when I was a kid.

The menu system is packed with options and filters and choices of visualization. A few menus down, there is a plainly-labeled “Music” that allows you to pump the world full of the sounds of your choosing. I flipped through my music for a while, trying to find something appropriate, although I can’t tell you what kind of music is appropriate for flying around in nonspace doing nonsense things until the screen goes glitchy and you have to start all over again.

If you can’t tell, The Polynomial was disappointing me. It wasn’t delivering the kind of experience I had thought that it would deliver. I wanted worlds rendered based on my music choices, and after plugging a few mp3s into the system, I figured out that wasn’t what was going to be happening. At best I was changing the pulsing of the rendered galaxy/christmas tree/big tube that I would fly through and be killed by angry Pac Men.

I played for ten minutes and stopped.

I didn’t play for a couple days. I came back to it.

I tried to launch the game and realized that a driver update had, for some reason, killed the ability for my graphics card to actually do anything in OpenGL. I took two hours to fix it, silently raging against the system, the world, the techno-obfuscation that made every solution I could find into a ridiculously strange system of interactions that I couldn’t parse.

The short of it: I fixed it and I was in a bad mood.

I launched The Polynomial and prepared myself for an hour of suffering through it in order to write this. I queued up an album that I have been getting a lot of mileage out of lately, Zola Jesus’ Stridulum, and started flying.

Then it clicked. The Polynomial, in sharp contrast to its technical substrate, its bones, played seamlessly. I flew through space and pulsing clouds of light. Some numbers went up and I dodged c-beams that glittered in the dark. I wasn’t awed as much by the game as I was the kind of masking that was going on, something that is always apparent to me but was thrown into such deep and explicit contrast over the past few minutes that I couldn’t ignore it; the game, mere numbers and algorithms, achieved an aesthetic and affective linkage that I can’t possibly do any justice to.

There’s a beauty to watching numbers proliferate onscreen. To see the world reduced to figures and then reborn as a unrecognizable representation of itself. When I changed Zola Jesus to Riff Raff, I understood that the world itself was about to change–Riff’s deep beats and 808s vibrated the reality, the body, of The Polynomial.

So what do I think of the game itself? I think it is a fun visual experiment more than it is a game I am interested in playing for an extended amount of time. I think it does wonderful things to bring what I wanted as a weird teenager into the world while also denying that dream, that absolute procedural generation of things in the world based on music, which is both perfectly fine and sort of sad.

The Polynomial rides a line both beautiful and disappointing.