You Buy It I Write It: Fortix

This is part of my policy of playing anything someone purchases for me. You can read more about that here.

Fortix is a game about capturing territory. If you want to split hairs, it is a game that is all about cutting smaller squares out of a much larger square.

The setup is simple enough. You are a knight who wants to recapture the world from the evil sorcerer-dragon-winged villain Xitrof, who has driven all of the “good” from the world. I will let the game’s description speak for itself:

Can you reclaim your ancestors’ land? Evil forces have taken over the once fertile land of Fortiana. You are the only one who can storm the castles and claw it back from the hordes of dragons. Experience a new type of strategy and arcade game. Fence off parts of the battlefield to corner your enemies. Collect catapults and power-ups to besiege the fortresses and take on dragons. But beware! As you progress through the levels it gets harder and harder. The fortresses become much larger and the monsters more vicious. Can you emerge victorious and reclaim the land of your ancestors? You are knight Fortix, the sole hope for the desolate and tortured land of Fortiana to become the fertile land that it was before.

Fortix works his way across the map, taking back the twelve shires of the king from the villain who has invaded the land.

All of this is window dressing for what the game is: it is about using the mouse or keyboard to make cuts in the map in order to “reclaim” territory from the enemy. The enemy territory generally has two things: dragons and towers. These dragons and towers can only hard the player when the player is “inside” of their territory. When Fortrix walks from the bounds of the map into the enemy territory, he leaves a colorful line behind himself. If a tower shoots a cannonball and it touches that line, the player loses a life. If a dragon touches that line, the player loses a life.

The goal of the game, as I said before, is capturing territory. After the player makes an incursion into the territory, she has to hurry back to another point on the map in order to capture the territory that was bounded in by the incursion. It is hard to explain. Watch this video.

I’ll be totally honest here: when Jonathan told me that he was trolling Metacritic to find middling, cheap games to make me play, I was really dreading it. When he linked Fortix to me, I literally groaned out loud.

I installed the game and booted it up and roughly 100 minutes later I had completed it. 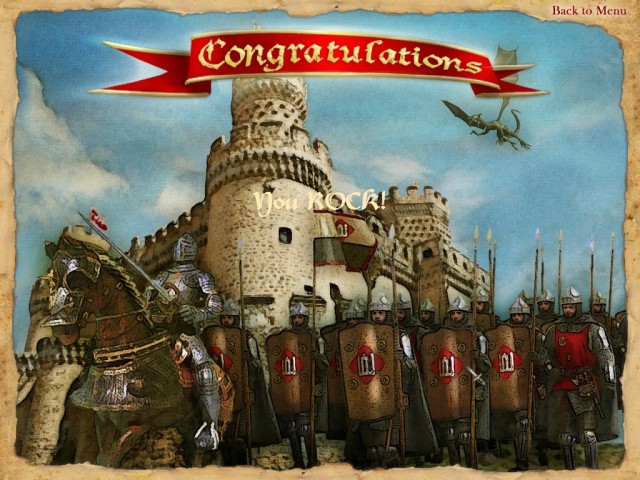 Let me try to tell you why I liked the game so much: the risk and reward involved is very, very rewarding. The enemy variations, and how they respond to player actions, mean that the game gets harder because the capture of territory becomes increasingly more brutal. I found myself slipping out into enemy territory and flipping back almost immediately, capturing a small amount of territory. As I got more confident, I started splitting the territory I needed to capture in half–I started running straight up the middle, clipping through the fortresses, quickly closing out my missions as the cannonballs flew.

This doesn’t sound exciting, but it is.

Sort-of-sadly, the game doesn’t have much else to it. I don’t have a brilliant read on the game. I don’t think it does anything amazing, although the core gameplay concept is novel enough. There isn’t anything else there, though, which is why this is sort of short. I liked the game for what it was, and it is definitely worth $1.

I think I probably had more “fun” playing Fortix than I did playing through Dishonored? I don’t know. That’s a tall order, and a weird thing to say, but it might be true.

You can purchase Fortix on Steam.

This entry was posted in Video Games, You Buy It I Write It and tagged fortix, video games. Bookmark the permalink.

2 Responses to You Buy It I Write It: Fortix