I played Suikoden for a really simple reason: I bought an old Mac Mini that can barely do anything, but it can emulate games. When I realized this, I thought, “Hey, that’s cool, I’ll go back and play all the games I missed during the SNES/PS1 era.”  I initially attempted to play Super Mario World, but it beat my ass continually, so I tried Suikoden. True story.

Luckily, Suikoden is a really great game. I have some theoretical content on the game, so if that’s what you’re concerned about, skip down to the bottom of this post, but I’ll actually give a quick review of the game.

The game does not explain anything to you. The magic system is governed by some kind of rune system, but I really never figured out how it worked, and I didn’t even have a healer in my party until the end of the game. The same goes for the system for weapons upgrade, which is done through adding rune shards to weapons as well as sharpening them. I didn’t figure those things out until the last couple hours, either.

But there’s something liberating in not having your hand held through a game. There is no being over you that tells you where to go. No quest log. Most of the time, NPCs seem to forget the plot-centered discussion you just had with them, which meant that, after not playing the game for a couple days, I would have to routinely go online to figure out the next step in the game. I would just forget. I started writing things down after a while.

The combat is interesting, and if you want to see the three kinds of combat, watch this review by some person on youtube. He shows the three kinds of combat, which consist of traditional RPG fare, a one on one dueling system, and large-scale combat. The latter two are essentially rock paper scissor games, but they add a sense of bigger things going on in the game world, which is refreshing.

This is the beginning of serious thoughts about the video game Suikoden in case you are scrolling down for the meat of this post.

The draw of Suikoden is that, throughout the game, you can recruit people to join the Liberation Army, which is a rebellion against the empire that everyone lives under. What I don’t understand, however, is why any of this matters. The game repeatedly says that the Emperor is evil, and as you progress through the game, several former allies of the Emperor say that he is a “changed man.” However, I never saw a single thing that the Emperor did that was bad. Now, imperial soldiers did a lot of terrible things: kidnapping, genocide of the elves (I’m not kidding), and just generally being autocratic assholes. Those things are super-bad, too, but in the end, all of those assholes become part of the Liberation Army.

Now, this leaves us at an interesting place. I have to wonder why the Emperor is bad, and if the game tells me that he’s bad because he has “changed,” then that’s what I have to go with. In essence, the rules that the Emperor established at the creation of the Empire have somehow been violated. We’re told why the Emperor has changed; a new sorceress, Windy, has come into his court. It is repeatedly, and I mean repeatedly, told to the player that the Emperor only brought Windy into his court because she looks like his dead wife, which is a weird fact to bring up all the time.

In any case, the theory of the world that the game puts forth roughly looks like this:

1. The social contract is formed around the sovereign and, in this case, his relationship with his subjects. If the sovereign appears disingenuous, or “changes” in any way, the subject has both an option and a right to depose that sovereign.
2. The agent of change can be ignored safely, since removing the sovereign removes the problem.
3. Rebellion is the only option.

Now, I understand that this is ultimately a fantasy video game, and this is quite frankly one of the most interesting ones I have played, but there are some problems here. The philosophy of the game is pretty obviously fucked, as we are shown repeatedly, but I think there’s something we can pull from the game and apply to the “real” world, and it can show us the pitfalls that revolt without a change in ideology can have. 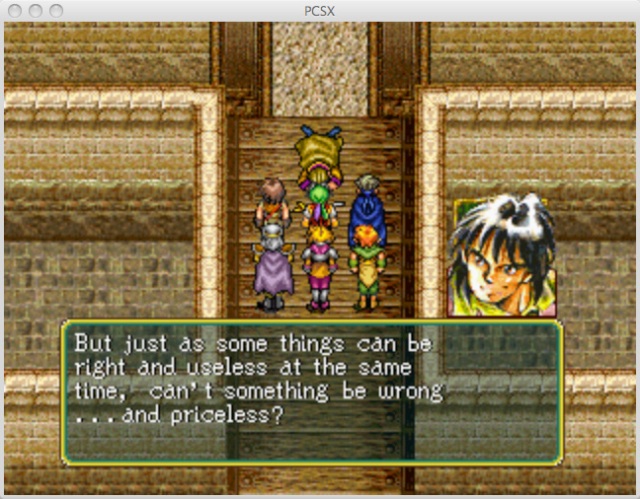 Right now, we conceive in a liberal social contract, in that we suppress everyone to the same base level in order to “grant” ourselves rights via the sovereign. This is how governments work. Now, in a world where we can see institutional injustice, or perceived injustice, Suikoden would have us believe that we should simply revolt. We go looking for alike minds, we pull them into the political fold, and we rise up against the perceived oppression. We “recruit” in the same way that the Liberation Army would.

The Tea Party, for example, sees the world in the way that Suikoden does. The United States Federal Government, though founded on some kind of beautiful, pure principle, has been taken over by Socialists/Muslims/Terrorists, and only through a complete Liberation Army experience can we get through it–the parallel stretches even further when you consider that, in the game, the Empire is not abolished. Only the sovereign changes. At this point, we’re getting to the point that I want to make; what feels like a revolution is nothing more than an election cycle that’s gotten out of hand. The Suikoden world of betrayal plays on a myth that, somehow, changing the acting power will get rid of the worst parts of the system. 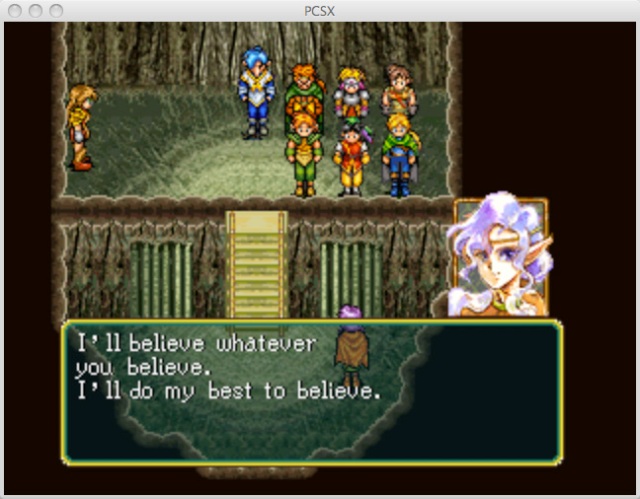 In any case, what I’m getting around to saying is that we need to rethink capitalism. The mantra of growth is the Windy of our world; it is a cruel magician that wears the mask of the sovereign. However, though Suikoden grips us in the hold of normative ideology, it gives a way out: in the end of the game, the Emperor, realizing what has happened, grabs hold of Windy and leaps from the roof of the castle, destroying them both.

Hegemony. Included just because the reasoning is so strange.

1 Response to On Suikoden