Game: Hugo’s House of Horrors (a complete playthrough at youtube)

I picked this game because Darius suggested it to me over Twitter. I remember the game faintly–it was on one of those shareware disks of ONE MILLION GAMES that you could buy at Wal-Mart for $10 back in the mid-90s. Shareware was a big part of my young life, and I think that I will probably write something in the future about the impossible-to-complete games that I had and how that really altered my view of art.

That is a digression for another day.

Hugo’s House of Horrors is a game about Hugo. This is the entire story as it is presented to the player in the opening screens of the game:

The story so far…You are in total control of Hugo’s destiny as he searches the haunted house for his sweetheart Penelope! (She was last seen going into this house on a baby-sitting assignment)

That’s all we get. The game is–and my vocabulary works is woefully bare here–the kind of game where you walk around and interact with things. A Sierra-style adventure game? Commands are input through a prompt at the bottom of the screen, and you better be damn sure that you have the words at hand to do what you want. I spent five minutes trying to pick up a weird blob, finally said fuck it, and died at a monster dinner party. C’est la mort.

There is a strong affinity between HHH and Deep Sleep, specifically in the way that action is framed. There is a terrible lag between player input and Hugo’s actions. Surprisingly, this makes the game more interesting. At the surface level, it makes it clear that Hugo isn’t some self-insertion character or a power fantasy that fulfills all of my dreams. No, instead he is clearly a vaguely inept person who can’t seem to navigate a home. The irony of this is that the opening of the game tells me that I’m “in total control” of Hugo. Total control is here reduced to “vague metaphysical actor.”

Hugo’s House of Horrors turns me into an impotent god and rubs it in my face.

There is also something amazing going on in Hugo’s House of Horrors. The game is a weird amalgam of story elements and just plain terrible writing and gameplay. At its most ridiculous, you have to pick up a plug early in the game and then much later you use it to plug a hole in a boat that travels ten feet vertically on the screen. Then you have to answer questions presented to you by an old man or risk immediate failure of the game. Oh, and those questions are massively nerdy questions about popular nerd culture like “What was the first name of the hero in ‘The Hobbit’?”

Let me remind you that you lose the game if you fail to answer these questions properly the first time. I’ll be clear and say that I’m not disparaging the design choices. They’re bizarre, of course, but they’re also unique. There is nothing I want more than to have a forced trivia section pop up in Halo 4 that immediately drops you back to the main menu when you get an answer wrong.

These design peculiarities mark the gamespace of Hugo’s House of Horrors in a particular way. HHH is a game that is trying its best to make you leave it. It wants to force you out, to keep you from playing, and to make you feel like a failure for not predicting the future.

A confession: this is how I ended my playthrough of the game: 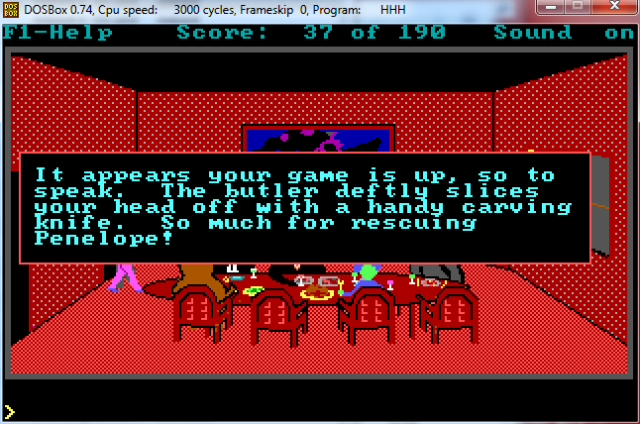 Hugo went down like a sack of bricks because he walked into a room without a mask on. There’s something undeniably real about the scenario, or at least much more real than even your “best” sim of the contemporary video game era. The universe of Hugo’s House of Horrors doesn’t give a shit about you or your ability to prepare for an encounter. Sure, you can play the game again, but it controls so terribly that you don’t want to. It is a game that expels you from it expertly.

The horror is in that very moment of expulsion. I find horror in the moment that I realized that Hugo was doomed to death by a number of unexplainable scenarios and that I would have to live his life over and over again, making small strides, until I succeeded against overwhelming odds. Hugo’s House of Horrors turns the eternal return on its head. It presents the possibility of infinite life to the player and says “do you really want to go through with this?”

Hugo’s House of Horrors is a nihilism machine.

Also, a small note, but some of the environments of the game are profoundly scary and strange. I think the backyard is the peak: 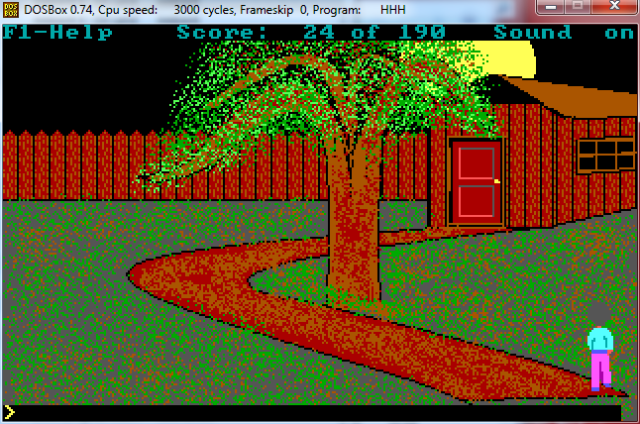