A Battle Before the Beginning of Time

I am fascinated with the idea of the “battle before time” in video games. A conflict that happened before the player existed, independent of the game world’s existence as only there for player consumption. I, like a few others (most especially Darius Kazemi), am concerned with what it means for a game world to not be centered around the experience of the player. This has roots in speculative realism, and more particularly in a reading of the object-oriented ontology subgroup housed within the broad umbrella of SR.

The Fallout franchise is at the top of the pile as far as these noncorrelationist video games are concerned. The world goes about its business when you are not around. People have routines, maintenance, stories that exist outside of player access. More particularly, the narrative goes out of its way to present a global annihilation conflict and its aftereffects on an incredibly long timescale. Though each player moves through the Fallout games feeling very important to the world, what the timescale and the number of games should tell the player is this: these world-breaking events are always happening.

Killing the supermutant overlord in the first game is merely a blip in the political movements of the world. You felt important, but only because of your smallness. The huge, gameworld-overtaking megachurch from the first game is totally forgotten in the space between the first and second games. By the time that New Vegas rolls around, it might as well have never happened. The Vault Dweller was only important in the player’s memories.

The world, as Stephen King would write, moved on.

I was playing Fallout: New Vegas this morning and found a strange thing. I found an underpass set up with barricades. There were bodies strewn around, and a few feral ghouls that had obviously moved in like crows after a battle. I saw a small forward operating base with bodies inside; an overpass defensive position was also covered in plasma-weapon armed troops.

What had happened here?

This is the “battle before time.” The machinery of the world keeps pumping on, even if the player is not there. I couldn’t be sure if they were placed there or if they were spawned when I got close, allowed to fight their battle, and then left there. 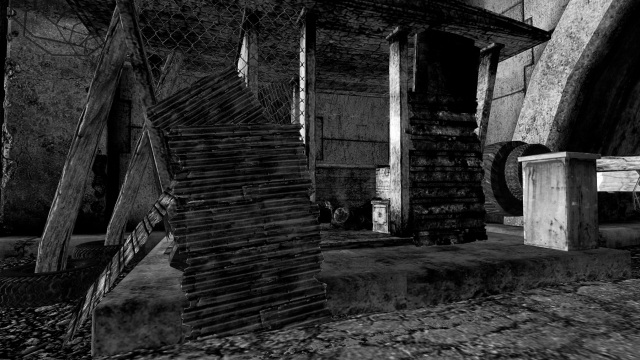