I played through Dear Esther again. In my initial post, I made some assumptions and arguments about the storyline that was going on in the game. I have to tell you right now, at the top of this post, that I was wrong. In fact, I played the game again, and I came to absolutely different conclusions about the narrator and the fictional conditions that created the world that he lived in.

I started writing this post as a way of telling a new story. In fact, I just deleted 500 words of plotline. I was going to tell you about Donnelley and Jacobson and the illness they had and what that means to the narrator (who I had named N., like in a Kafka novel, to simplify my story.) But I was reading my notes from my second playthrough, and it felt disingenuous. The story feels too big, and even if I copied the words down straight from my page, it would somehow miss the point. We have a long tradition of theorists and philosophers explaining in great detail that the world is too big, that language always has an excess, that a mere fraction can be captured. And I am afraid that if I tried, even if I took tens of thousands of words and posted a screenshot of every ten seconds, that I couldn’t communicate it to you. I can’t make words that would approximate the feelings I had while playing the game, and it was only better the second time.

However, I think I can talk about instances of enjoyment. Moments where I felt some immense affective force. I don’t think I can explain them properly–so I’m just going to

1. The chief concern in the game is the death of Esther, the narrator’s wife. She died in a car accident, and a man named Paul was responsible. The narrator tells a story of meeting Paul, and claims that he was “beyond any conceivable boundary of life.” The man was consumed by guilt, and the narrator says later that he finds himself “increasingly unable to find that point where the hermit ends and Paul and I begin.” The hermit, as we are told, came to the island in a boat without a bottom and died there at an incredibly old age. He is a dead mythological figure, and the narrator thinks that he and Paul are the same.

2. This quote, presumably about Donnelley:

He left his body to the medical school and was duly opened out for a crowd of students twenty-one days after his passing. The report is included in my edition of his book. The syphilis has torn through his guts like a drunk driver, scrambling his organs like eggs on a plate. But enough definition remained for a cursory examination and, as I suspected, they found clear evidence of kidney stones. He is likely to have spent the last years of his life in considerable pain; perhaps this is the root of his laudanum habit. Although its use makes him an unreliable witness, I find myself increasingly drawn into his orbit. 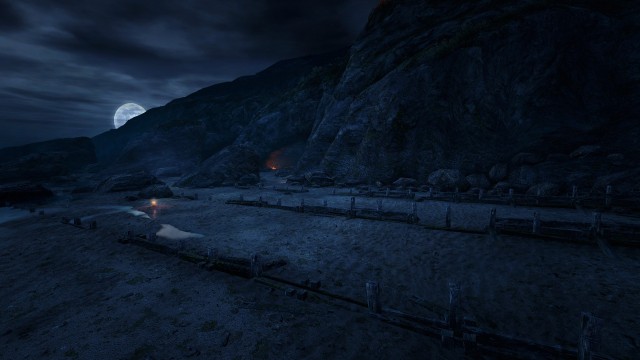 3. I like the surreal, dreamlike qualities of the game. I like the idea that time collapses for the narrator and for the player. My original post made a mistake because I took the end of the game, where the narrator says “Esther Donnelley,” as a moment of revelation. I thought it “solved” the story in that it gave a name and psychosis to the player/narrator. But I know I was wrong. Everything has collapsed–history is gone because everything is happening, will happen, and has happened. The deep past is present on the island, which feels post-apocalyptic. Everything is in ruins, even though the narrator says he lives there.

In my final dream, I sat at peace with Jakobson and watched the moon over the Sandford junction, goats grazing on the hard shoulder, a world gone to weed and redemption. He showed me his fever scars, and I mine, between each shoulder the nascency of flight.

4. My second playthrough really focused on the narrator’s relationship with Paul. I feel like someone will eventually do the revealing work on the character of Paul that is laid so deep in the game–the narrator could be Paul, after all, even though it is unlikely. In any case:

There were chemical diagrams on the mug he gave me coffee in; sticky at the handle where his hands shook. . . . You could trace the connections with your finger, join the dots and whole new compounds would be summoned into activity.

This is the act of playing Dear Esther. It is flailing in the dark, connecting the dots with your mind and input organs, trying to force meaning out of it. It actively resists meaning anything at all, and there is something comforting in that. The game, by the very nature of its structure, renders itself opaque to us. The multiple narratives, driven together by random number generation, crash into our minds. It renders our interpretive mechanisms sharp yet ineffective. I have read some beautiful interpretations of the game, but they are all wrong, simply because they exist. 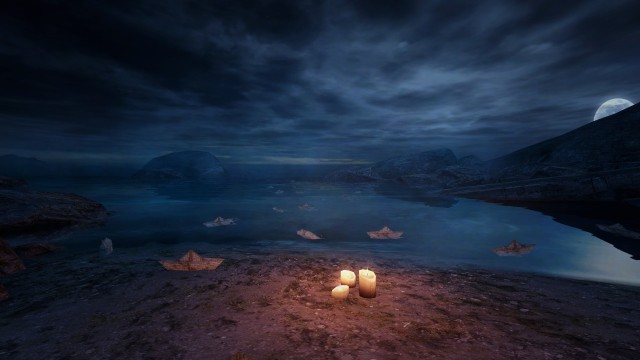 5.  I’m going to end with my favorite quote from the game. It doesn’t fit into this post, and maybe it’s for the best:

A sound of torn metal, teeth running over the edge of the rocks, a moon that casts a signal. As I lay pinned beside you, the ticking of the cooling engine, and the calling from a great height, all my mind as a bypass.

16 Responses to On Dear Esther (again)