“Like a sack with an animal trapped inside”: on the quizzle 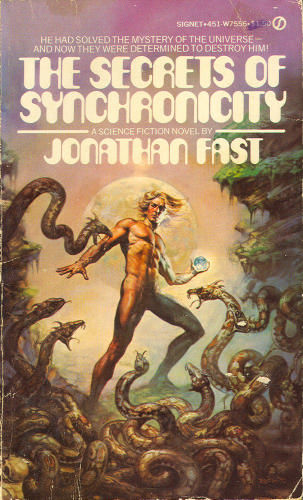 I just finished Jonathan Fast’s The Secrets of Synchronicity, and while the book on the whole isn’t so great, there’s a section later in the book that has to do with quizzles.

“It’s a lump of rock,” Ar-Nett explained, “that thinks it’s an animal. They wander between the stars looking for energy, any kind of energy at all. Nuclear fuel, pulsar radiation, even prana — human energy. That’s a special delicacy. Strange kind of creature. Some scientists say it’s them unfold the warproutes, but nobody’s proved it. ” [114]

I think the animated inanimate matter of the quizzle being a lump of rock is super interesting, but what I think is really brilliant is the bit about the warproute. Earlier in the novel, we learn that warproutes, which are the interstellar routes that ships travel in the book’s universe, can appear and disappear at random. They are purely contingent, existing for a finite amount of time before disintegrating into nothing and leaving whole corners of the galaxy (universe? the book is unclear) as abandoned backwater planets.

The idea that these crucial pathways could be crafted by these nonhuman, semi-living beings is just wonderful characterization of how the world exists already. Human lives are built on layers and layers of nonhuman sediment, whether that is literal in the case of things that live on and in the earth, or symbolically in the case of animals on which we have built the category of “the human.”

Even more amazing is the following quotation in which we actually see a quizzle, and the nonhuman is rendered in a kind of “greatest hits” of inhuman things — an anus, a molten core, an animal trapped in a bloated bag. Its body is a confrontation with everything we need to disavow in order to assert human mastery and uniqueness in the universe.

I didn’t want to take my eyes off my work, but something in Alan’s voice made me. I looked along the cable I was trying to cut, toward the end of it, which vanished into darkness. And out of the darkness I saw something creeping, some crude shapeless thing of black which swelled and shrank rhythmically as though respirating. And along the gray cable it crept toward us, slowly, silently, with what seemed like a conscious purposefulness.

I could see it better now, smooth and black as pitch, slowly twisting and jerking like a sack with an animal trapped inside. I went back to work on the cable, but it had to take another ten minutes, and the quizzle was gaining speed. Fifteen feet away now and a hole opening in it, a sphincter mouth, the light from the blazing furnace inside turning everything scarlet, and Alan screaming, “It’s coming to drink my life force, don’t let it get me, Stefin, kill me please, kill me with the laser…” [117]

This entry was posted in Theory and tagged jonathan fast, science fiction, speculative fiction, the secrets of synchronicity, theory. Bookmark the permalink.

4 Responses to “Like a sack with an animal trapped inside”: on the quizzle