Trying to Read Again: New Copies of Deleuze and Guattari

It is weird to see what has changed. High school me read with a heavy-flowing, wide-tipped pen and underlined every political passage in Anti-Oedipus with wild abandon. I remember making the lowest possible score without failing in a math class my final semester in high school because I was working through A Thousand Plateaus. I have no idea what I got out of it other than a 90% underlined “Micropolitics and Segmentarity.” In any case, as Deleuze and Guattari write in “Rhizome,” the books caught me up in themselves. They crept through me and changed how I thought. When I was sixteen, I was reading them not as philosophy, but as wildly evocative fiction, nonfiction, as an announcement of totally weird shit involving history and Nietzsche and apparatuses. I was enthralled with a story about philosophy bound up in a lecture by Professor Challenger, who slowly explained big and strange concepts to me while slowly becoming a monster. It was exciting and new and encouraged me, via philosophy and critical theory, to be where I am today.

They have a material history. I was able to purchase Anti-Oedipus because I scraped together cash over a very long time. Then my friend drove me thirty minutes away to the nearest bookstore, where I spent something like $30 on it. For some reason, he had water in the backseat floorboard of his car, and on the way home he stopped at a stop sign, causing the book to dunk right in it. It made me feel awful — the expenditure of $30 at that time might have been $100 — and the first few pages of the book are still discolored today.

The corners are all flipping up from being turned so often. They’re creased and folded from being put in bags, getting caught on fabric. They’re water damaged from coffee, water bottles, being stuck in backpacks when I’m walking in the rain. The edges are just grimy from being touched over and over and over again.

So I am retiring these copies. 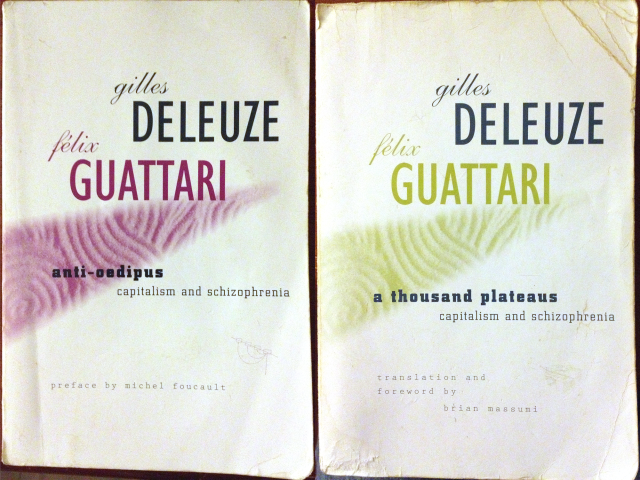 and I bought these copies 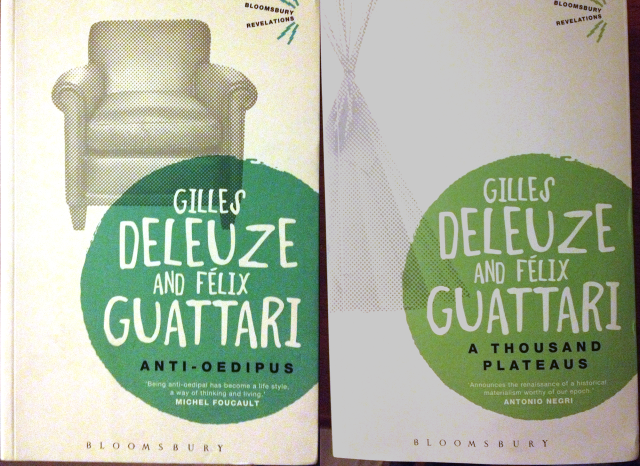 One reason that I’m doing this is that I feel like I’m at the point where I need to come at these texts fresh. My original copies are so underlined and annotated that I have problems seeing the text as text and not as a set of prearranged arguments that I’ve outlined for myself.

Another reason is that I think these new copies, published by Bloomsbury, are just better. A Thousand Plateaus is a difficult book, and the cramped text of the Minnesota didn’t do anything to help with that. The Bloomsbury books are laid out in a new way, with a well-spaced font that gives you space to, you know, think about what is actually on the pages. 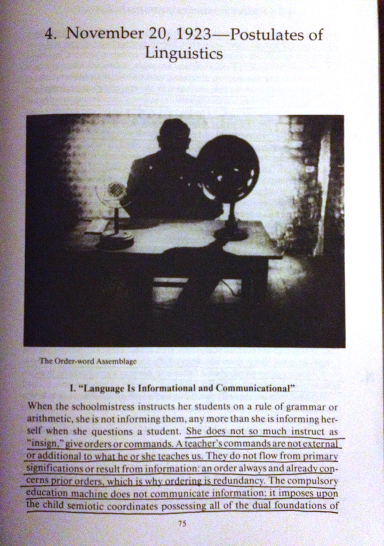 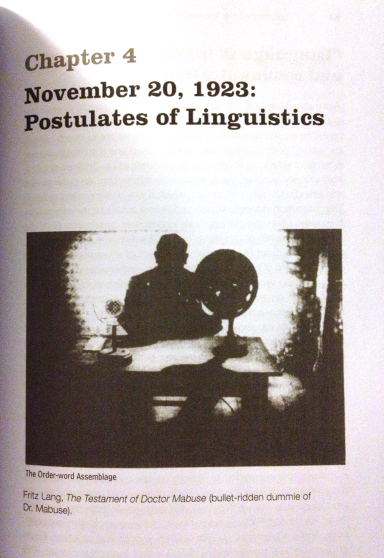 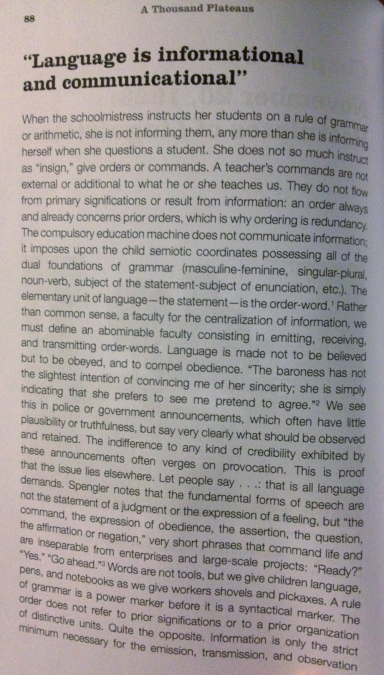 I apologize for the awful pictures, but the first image is from the Minnesota edition of A Thousand Plateaus. The second two are from the Bloomsbury edition. The opening picture is on a separate page, the text isn’t as cramped, and there’s some neat layout stuff going on (and the number for the subheading is removed).

In any case, I’m excited to read these books again in these editions.

This entry was posted in Theory and tagged a thousand plateaus, anti-oedipus, felix guattari, gilles deleuze. Bookmark the permalink.

1 Response to Trying to Read Again: New Copies of Deleuze and Guattari