This essay is part of my Final Fantasy IX series of articles. 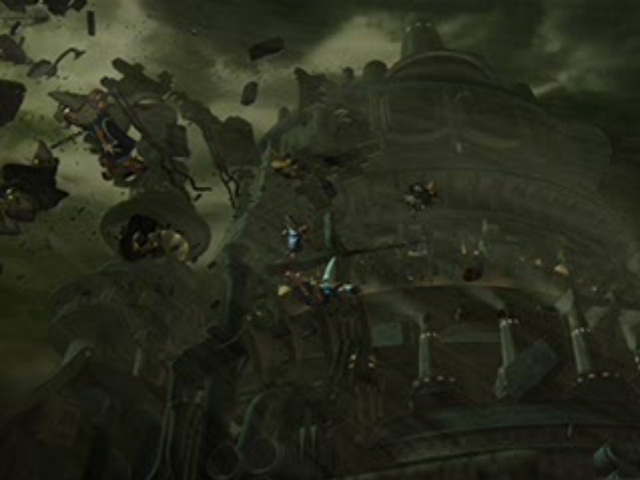 This is the first scene of mass destruction we are presented with in Final Fantasy IX. It is the eidolon Atomos being summoned to destroy the citystate of Lindblum.

You can watch the two minute video here.

A visual analysis of the scene gives you something like this: there is a giant creature sucking everything into itself. It contains a black hole, a great void, that can never be filled–and yet, here it is, drawing things into itself to fill it up. Atomos has an appetite for everything, for existence itself. The material interacts with Atomos is radically altered, not just in composition, but in relation to itself. The images are muddy, and part of that is the low-fi nature of a game made in 2000, but it isn’t just that. Lindblum soldiers, glass, airships, furniture, bricks, and construct soldiers are all absorbed into Atomos.

Atomos is an event that establishes a relation to itself, regardless of previous qualities or ontologies. It must be reckoned with.

A political analysis of this point in the narrative might be helpful. There are two nations, Alexandria and Lindblum. Alexandria is ruled by Queen Brahne who has decided to make a bid for world domination with the help of Kuja, the prime antagonist of the game. Kuja, acting as a weapons dealer, convinces the queen to manufacture automaton soldiers and seek out eidolons to accomplish her goal. The scene depicted above is the final product of those plans.

This moment of attack is important because it sets a strain of thinking about destruction that echoes through the rest of the game: destruction is an event that radically rearticulates relationships between entities.

The history of the world of Final Fantasy IX, Gaia, is presented to the player piecemeal. We are shown statues and titles of books (this will get its own post.) What we are painfully aware of is the fractured nature of the past world. Only in recent years have kingdoms settled into stable territories and states–the creation of technologies of travel and stable trade have generated an “end of history” for Gaia.

However, the Gaian end of history mirrors the 1990s “end of history” in Western liberal democracies. Proclamations of stability ignore the xenophobia that stability rests upon. Cleyra, a country of anthropomorphic rats, is often referred to as a nation of vermin by the the more humanesque denizens. The Alexandria war mongering draws out regional hatred for Alexandrians in Lindblum. These countries, with long histories of fighting, are split along territorial and ideological grounds. They are disparate.

But the summoning of Atomos unites them. The bourgeois knight, the princess, the agrarian girl, the monster, the construct, the rat, the manufactured other, and the hitman all unite together to dismantle the hyperviolence of state-sanctioned weapons of mass destruction. The event streamlines difference–it provides a rallying banner that the characters, and nations, of the game can assimilate beneath.

So the narrative of Final Fantasy IX provides an alternate history. It presents us with a world where action after the nuclear option is actually possible. It is a hope that there is a narrative outside of that political problem, something significant, that adds meaning to absolute destruction and the rendering of being into ash.