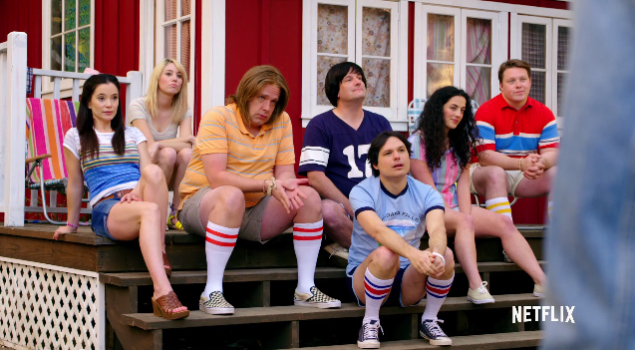 I’ve been down with Wet Hot American Summer for something like a decade. I think that I might have learned about it via a weird daisy chain of really liking Reno 911, learning about the connection to The State, and then finding out about what all of the members of that troupe had done when their media deals had imploded. My best friend and I found some kind of digital copy (probably shared through illegitimate Livejournal communities), and we watched it over and over again.

I’ve watched it on and off pretty much constantly in the years since then. I’ve weathered the best and worst of the David Wain films from The Ten to Wanderlust, and there were moments when Wain’s sensibilities met a State-esque script in order to hit a high note that felt like we were back at that camp during the last gasp of summer.

So when First Day of Camp was announced, I was over the moon. It was going to be a serious follow-up that took all the gags from the original film to their conclusion. The actors would be the same, totally ignoring their age like in the original. It would be a prequel rather than the promised sequel of the film (the most Wain joke possible). They would have money, and time, and creative control.

So, finally having watched First Day of Camp as the most core of core viewers, what did I think?

It’s the same, but it’s stretched out. The joke content is all there, but it has time to stretch its legs. And I don’t know if it needs to be.

David Wain is the master of the 90 minute comedy. He hits target length, and the jokes don’t wear out their welcome because they’re coming at you a mile a minute. His strategy is always “set up a scene with strange logic and then play that logic as far as it will take you,” and generally that strange logic is literally just genre film mirrored back to itself. When Wet Hot American Summer becomes brutally parodic, it isn’t because the creative team is actually doing anything particularly out of the ordinary; they’re just producing the ordinary-as-story rather than the ordinary-as-material which inevitably points out how strange the cultural stories we have actually are.

First Day of Camp, like everything that comes out of this team, is built on that basic scaffolding. The journalist pretending to be a counselor story. The lost rock god story. The hidden military man story. The conspiracy narrative. The motley crew creating a work of art story. They’re all fully-baked genre experiences, and we can imagine each of them being deployed in the way that they were in the original Wet Hot American Summer film: each shows up in a tight two-minute scene that then recedes into time after we’ve had a laugh.

The format of First Day of Camp fights against that impulse. It rolls the plots across several episodes, and that just Does Not Work when the plot can’t sustain in that way. For example, Elizabeth Banks’ plotline is about her being a journalist who pretends to be a teenager to get a hot scoop about weird things happening at this camp. She finds out that there’s a reclusive rocker who lives in a cabin, and she helps him create his masterwork. And it’s funny in concept because this crowd is exceedingly good at purely conceptual humor to the point that the gag doesn’t need to actually exist. First Day of Camp drives forward, continually giving us the next step in the gag, and it does not pan out into anything (the rocker story does, but the journalist/mystery doesn’t). It peaks as a joke immediately and never goes beyond that initial impulse.

I think it’s a formal problem. They wanted to make the concept humor of Wet Hot work in this format, and it just straight-up doesn’t in some cases. Even when it is as its best, such as a the “sad-sack teenager is eternally sad,” it is a constraint that doesn’t seem to quite fit with the impulses of the writing team. You can tell that something that should be a three-bit gag turns into something that’s present in five different scenes across episodes, which really robs it of some punch that it could have had.

Overall, I think the show is excellent, but it drags in some small parts and I think it’s completely because of a weird mismatch between what the writing team has been doing for the past decade and what they (or Netflix) needed First Day of Camp to be.