A few weeks back I was in Tuscon for a conference, and while I was there the first (annual?) TAPE happened. I saw the signs around the touristy spots, and a friend and I wandered over in order to figure out what kind of local comic-y art scene Tucson had.

The great news is that I had a really good time at TAPE. As an independent creator of a few things (as well as someone who had a short stint making independent comics), I really like small local conventions where people have the opportunity to show off their work. I purchased a few things: 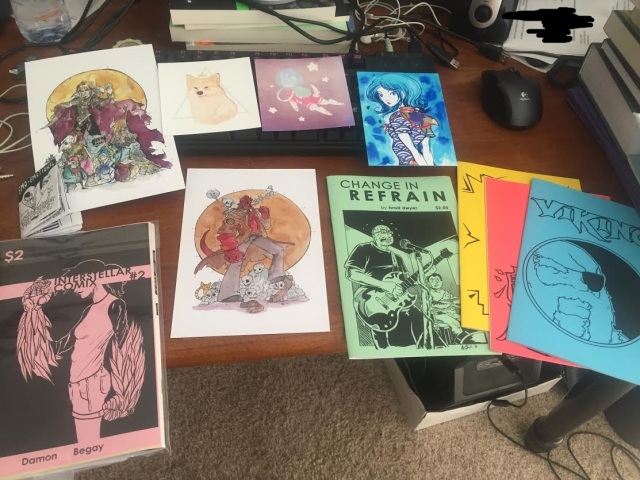 I’m pretty specific about my purchases at these things. I’m a big fan of spending my money where I know it will matter, and I would rather give my $5 or $10 to an independent creator than I would to some dealer offloading TPBs that the can’t sell at the store for 85%. So I want to talk about the people I met/talked to and the work that I purchased.

The “king corgi” is by an artist named Raeann Payne, whose Tumblr you can see here. I love how regal and magical it appears to be. She was sharing a table with Daisey Walker, who did the beautiful cartoon Laika, and we had a short chat about how sad that story is. Down from them was a guy named Santino Arturo who was (I think) selling a print that was too big for me to fit in my backpack, which meant it definitely wasn’t going to make it on the plane. Beside him was a young woman whose name I didn’t catch (but who wrote down her Tumblr for me) who was selling some great block prints; she was also doing some watercolor livedrawing stuff that literally made me holler “god damn that’s good!” and I wish that I had hung around and grabbed one.

There was a group of comic book creators across the aisle from those artists, and I grabbed quite a few of those: Damon Begay‘s INTERSTELLAR COMICS three-pack of science fictiony short stories in comics form; Brad Dwyer‘s CHANGE IN REFRAIN about his life before, during, and after being a musician; Reset Survivor aka Wil Hines’ VIKING, RONIN, and LION, a kind of thematic trilogy of violence and abduction. I’ve read all of them a couple times, and the fact that all three of these artists were working around the same couple tables is incredibly funny considering how radically different their work is.

Definitely check out Begay’s work so you can see a Navajo grandmother pilot a mech to fight against environmental racism and a scar-eyed American Imperialist villain.

The mostly-blue print of the girl comes from an artist named Kayla who goes by the handle Wizardkeys. Her work is super cool and you gotta check it out. The very angular interpretations of Hellboy and The Goblin King come from an artist named Holly Randall who works under Flying Flog Illustration; she’s got a very excellent Jill Thompson-esque flair to her stuff that I really loved (and loved so much that I bought two things!)

An additional laundry list of things I thought were cool: this dude named Hector Deleon was doing some pen art on the US Mail label stickers. They’re beautiful, go buy some. (He also told me there’s characters that show up time and again that have names and functions and that hits every button I have).

Allen Amis was there selling some really excellent Fallout cosplay gear/reproductions. The Pip-Boy mold he had was excellent, and he was nice enough to explain the basic process of making this really intricate helmets to me. You can see his work here and buy some of it here.

I met the guy behind Tenko King and purchased a cool little button from him. I wasn’t familiar with the comic (or only in passing maybe), but he also had some Chrono Trigger prints that were just maximally beautiful. THEY AREN’T EVEN ON THE SHOP ONLINE I SHOULD HAVE BOUGHT THEM WHAT A FOOL I AM!!!

I really loved my experience at TAPE and I would love to get there again somehow. The internet is a great place to find excellent art and artists just cranking out out and grinding hard, but there’s something special about the convention space that gets all these people together in a space where they can engage with one another and fans. And I never thought I would have this opinion: I kind of hate conventions, and was very, very bored by Boston Comic Con last year. TAPE did it differently–it didn’t feel like a nerd flea market. It felt like an excellent collection of creative types trying to make a buck to keep being creative types. And I am all about that.