On Interview With The Vampire 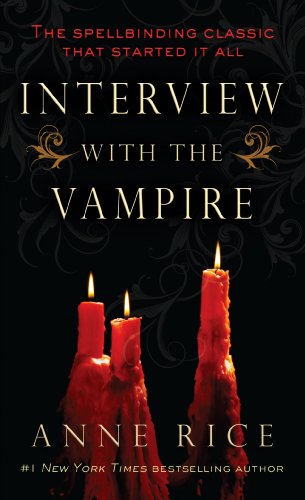 I finished reading Interview With The Vampire the other night and I just wanted to take a second to reflect on it.

I grew up loving weird interactions with Anne Rice’s Vampire Chronicles. I never read Interview or the following few books, but I loved the film (and I have a deep, strange love of Queen of the Damned and its very-dated official soundtrack). My cousin read them all over and over again, and he would tell me about the plots and connections. He explained who all these weird vampires were and why they acted the way they did.

I eventually read some of them. I wandered through Pandora and suffered Vittorio and had an excellent time with a vaguely familiar character in Blood and Gold. These were stories about weird times I hadn’t really read about (I was in middle school) combined with a lot of Very Adult Content to which I quickly adapted.

Reading Interview With The Vampire brought all of that back to me, or at least brought it back to the forefront of my mind. I can see the roots of my beliefs about homosexuality in the love-based relationships of the vampires. I can see early versions of my own thoughts about religion in the vampires’ ultimate confusion about whether there is or is not a divine presence.

What I mean by all of this is that Anne Rice’s vampires (along with a thousand other cultural objects) set me on a path that was open to kinds of lives and experiences that I could never experience in the rural South. The language that she uses for vampiricism–the constant refrain that life for them is wholly unlike human life–did not and does not dull me to empathizing with them, for feeling with them, and for having a strange, awe-like respect for the characters.

I have to say that this is a particularly weird place for me to be in after finishing the book. I spent the couple weeks it took me to read it actively decrying the writing, the characters, and the plot. It seemed to go nowhere. There are interminable scenes of how Louis feels without really presenting any stakes for those feelings other than a modulation of his intense interiority. I spent weeks reading the novel and thinking I was superior to it.

To begin with, that’s a shitty way to read a novel. Following from that, it allowed the novel to do something quite dramatic. No matter how I was framing Louis’ emotions, I was still reading them. When he described his relationship with Lestat, I was following along. And when Louis, deprived of emotion and dead on the inside, felt nothing and Lestat begged him to return and love him again, I teared up.

The stakes were precisely in the buildup of those emotions. It was about the superiority-transformed-to-sympathy. When the modulation of that interiority happened, when the character whose only trait was his feeling was unable to feel, it hit me super hard.

It is that layering of affect that shows Rice’s mastery in this novel. It isn’t in the writing or the storytelling. It is setting up a powerful emotional trap that’s fueled by confidence. To bring it back around to my middle school encounters with Rice’s work: this is how I encountered all of these ideas and accidentally had them stick with me. She paints it all on thick, layers of layers of emotion, and by the time you begin to organize them into real feelings you’ve forgotten about the primer layers. Then, years later, you peel away a covering and see that they were down there the whole time.

This entry was posted in Books and tagged anne rice, books, interview with the vampire, the vampire chronicles, vampires. Bookmark the permalink.
Loading Comments...
%d bloggers like this: