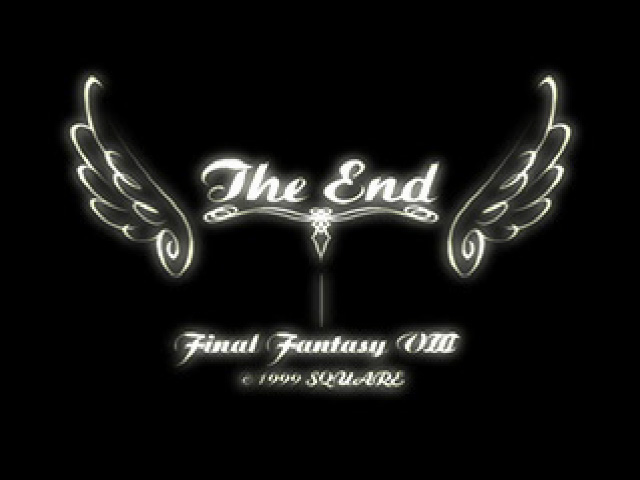 1. Lets get the boring stuff out of the way. Final Fantasy VIII is often derided as being the worst Final Fantasy game of the PSX era. As this very whatever article on Edge puts it: “The standard line on the trio of PlayStation games is that VII is the godhead, IX the neglected gem, and VIII the red-headed stepchild.” It is generally remembered for being confusing and the system you use for powering up your characters, the Junction System, actively punishes you for using magic that you have acquired. For more of that kind of thing, and a hopeful, reassuring paragraph, click here.

Unlike those two articles up there, I’m not here to offer up vague words and then say “well, history should treat this game better!” I just want to talk about Final Fantasy 8 for a while. There’s a LP of it here if you are so inclined.

2. The point of FF8 could be summed up thusly: “Everything you love will be taken from you. Life is mere palliation.”

3. A summary of the game’s story: a band of teenage mercenaries, in an effort to save those they love, defeat an evil sorceress from the future who seeks to collapse time and bend the universe to her will.

4. Final Fantasy VIII is based around the junction system. The characters in the game “junction” Guardian Forces (GFs) to themselves. Junctioning is magical bonding–the GFs imbue certain abilities onto the characters and allow them to enhance their physical and mental attributes by pairing magic spells to them. For example, a character will take a Thunder spell and junction it to their strength attribute, making them slightly stronger and increasing physical damage.

This system, like most systems, requires initial resources to make it work; characters need the magic before they can equip it. Therefore every GF imbues an ability called “Draw” onto its junctioned partner. There are “draw points” in the world–these are glowing purple fonts of magic that burst from the ground. However, this is not the only way to get magic. The most efficient and comprehensive way to gather magic is to draw it from enemies in combat.

The general response to this system is that it wastes time and encourages “gaming the system.” Time is understood as a resource. The junctioning system allows for every character to have maximum abilities in all categories if the player spends enough time collecting resources, refining items, and playing the in-game collectible card game. We will come back to this. 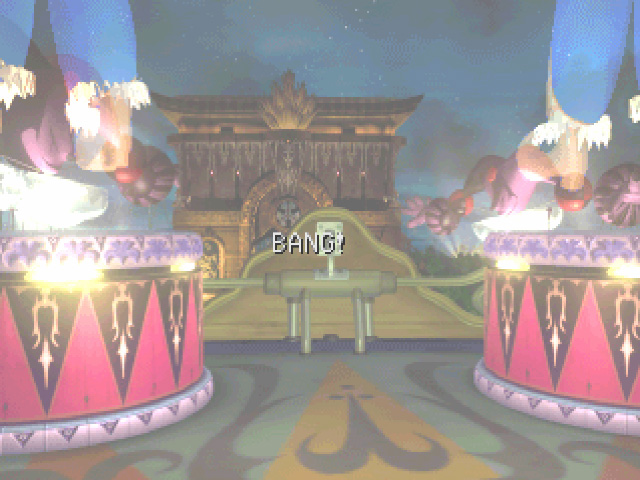 5. The Garden is a school that produces elite mercenaries called SeeDs. They are hired out to commit military operations all over the world. Squall and most of the main cast of Final Fantasy VIII are SeeDs, and halfway through the game everyone learns that the “real” reason that SeeDs were created is in order to curb the power of sorceresses, which are powerful magic users who occasionally become violent and oppressive political leaders.

I told you that to tell you this: the latter half of the game is spent countering the machinations of a powerful sorceress from the future. Her name is Ultimecia, and she projects herself back in time via a machine that replicates a human being with time travel powers. The flesh rots. The machine exists forever. Long live the nonflesh.

6. Remember the junctioning system? Each character can only hold a limited amount of magic. If you want to cast a Cure spell, but you have it junctioned to hit points in order to have more life, then casting that spell decreases your maximum hit point total.

You make choices. You cast the spell or you don’t. But no matter what, the enemy is going to hit you, and if you don’t cast the spell, you will lose the battle. It will be Game Over. So which is the better choice? To decrease your potential, to work against the labor you have already done, or losing in the face of staggering odds? 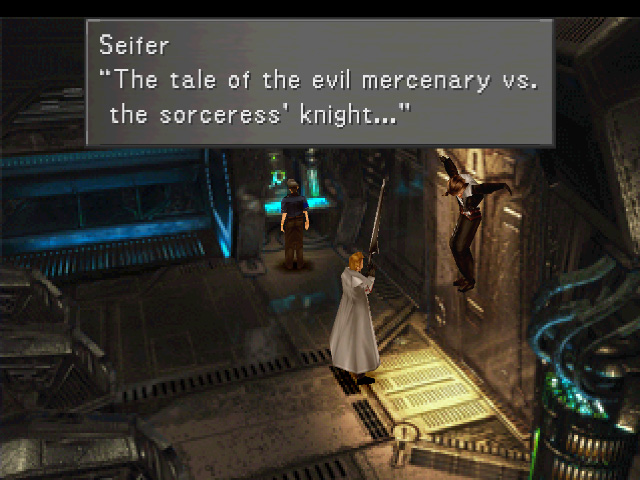 7. I don’t think there is any argument about the complexity of the pre-FF8 Final Fantasy games when it comes to morality: there are good guys and there are bad guys and there are very few greys in between. Final Fantasy VIII breaks with that by immediately positioning the player as complicit with the teenage mercenary trade, and the critique extends explicitly into the game via a story about “the sorceress and her knight.”

When Seifer, the rival of player-insert Squall, defects to the side of the Sorceress Edea, it is under the guise of becoming her knight. We’re introduced to the concept in snippets–the knight does the sorceresses bidding. He is her love and her weapon arm. Later in the game and further back in time (inside a parallel narrative), we see a character named Laguna playing the Knight in a cheap film recreating a classic fable that involves the knight protecting the sorceress from a fearsome (yet fake) dragon. The scene is interrupted when a real dragon shows up; as RPG rules decree, a battle ensues.

For Seifer, the dream dies when he realizes that being a knight means being a tool, a sharp wedge that gets driven between the sorceress and her goals. For Laguna, the drama is shattered when a real dragon comes into play. For both of these characters, what starts fiction-fulfillment changes into something violent and political–the Real comes crashing into them. 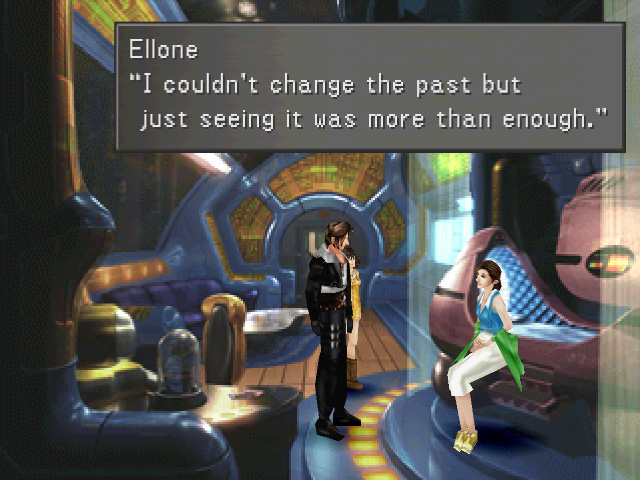 8. Guardian Forces, the very entities that make the game system work and, diegetically, allow for the characters to fight the powerful enemies of their world, destroy memory. A fractured conversation: “the GF makes its own place inside our brain”…”so if we keep relying on the GF, we won’t be able to remember a lot of things?”…”we gave up our memories in exchange for power?”

Everything has a cost. If you choose a path, you have to accept the consequences of that path.

So what do you want to do? You wanna stop using GF now? As long as we continue fighting, we’re indebted to the powers of the GF If there’s a price I have to pay for that, I’ll gladly pay for it. – [Squall]

So like…this is what I wanted to say. Let’s see… Oh yeah. I understand what Rinoa’s saying. I understand, but still I’m gonna fight. I want to stay true to everything I’ve stood for. I’m sure it’s the same for everyone. That’s why I thought it’d be best if everyone knew we would have to face Matron. You’ve all heard this before. How life has infinite possibilities. I don’t believe that one bit. There weren’t many paths for me to choose. Sometimes, there would only be one. From the limited possibilities I faced, the choices I made have brought me this far. That’s why I value the path I chose… I want to hold true to the path that HAD to be taken. I know our opponent is Matron, whom we all love very much. We might lose something very important on account of the GF. But I don’t mind. It’s not like I drifted here on the tides of fate. I’m here because I chose to be here. And more importantly… We all grew up together. But due to various circumstances, we were all separated. As a kid, you couldn’t really go out on your own… There were no other paths to take… All I did was just cry. But… – [Irvine]

10. The finale of the game takes place during time compression. Ultimecia, the evil sorceress from the future, compresses all of time into one space. Everything, and everyone, both exists and does not exist at the same time. All things are contingent on their relationship to other things–the characters promise not to forget one another. After all, if they do, then they cease to exist. A belief binary operation.

Remember all of those choices that I talked about before? In a time compressed world, none of that matters. All of those choices, and their power, are rendered moot by the eternal possibility of all things occurring immanently. The block quote above where Irvine justifies his life and the way he lived it is pointless when there is no path. No one chooses; no one is forced.

You can’t change the past. I just found that out.

11. A Number of Screenshots About Choice 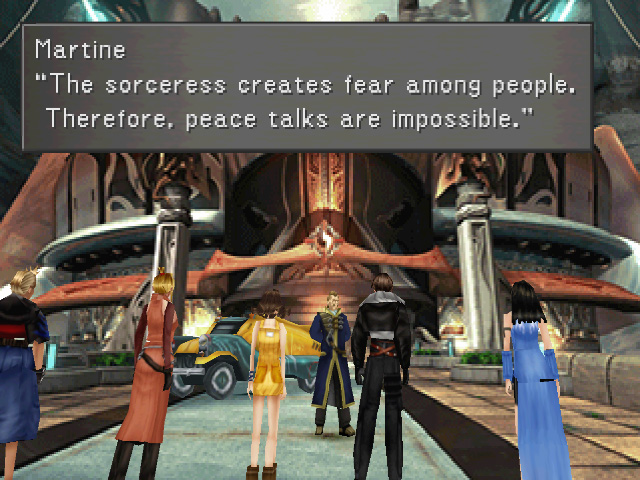 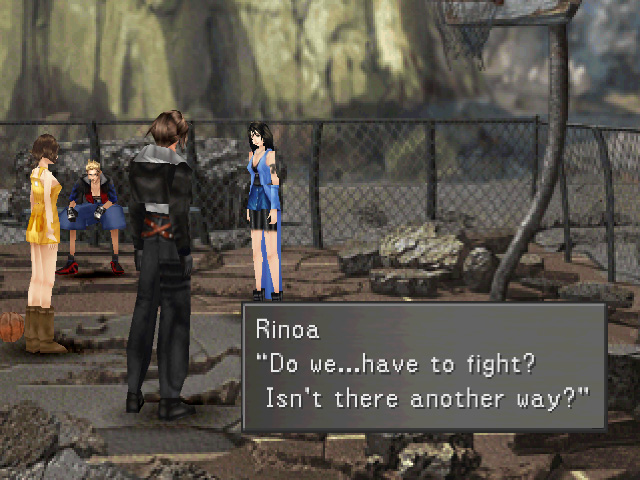 12. A radical reading of Final Fantasy VIII: a sorceress tries to defeat the linearity of time and free the universe from the shackles of chronology–what Irvine calls “the path.” A world without linear time is a world where all choices have occurred in all formulations. Through belief, which we are reminded over and over again as something that has real power in a time compressed world, a person could choose to live in the best of all possible worlds.

In a time compressed universe, one could truly live in the best of all possible worlds just by believing that it was possible.

A world of labor, of self-sacrifice and pain, of wasted time in protracted battles–all of that would be nonexistent. The game itself would disappear and the media object would become what it wanted to be the whole time–a film. Not only could the characters escape a world of pain and suffering and bad choices, but we could escape the spreadsheet management that is the junction system. We could just watch.

4 Responses to On Final Fantasy VIII