Two Recent Publications Of Mine About Games 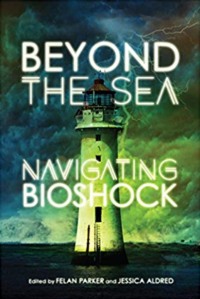 The first is a piece about speculation and video game play that is published in Science Fiction Film & Television. The basic argument is that while we have theorizations of how speculation operates in text or film, with attentive strategies of reading those media for the generation of speculation, we don’t necessarily have a robust amount of information about reading strategies for games. My article looks at a simple mode of game interaction, the click, and how it does speculation. I’m hoping that someone will pick up these ideas and run with them for other modes of interaction!

If you have access to Science Fiction Film & Television, you can read “The click of a button: Video games and the mechanics of speculation” here.

The second piece I’ve published recently is a long-in-the-works essay on Bioshock 2 that is soon to be published in Beyond The Sea: Navigating Bioshock, which is a collection of essays about the Bioshock franchise and was edited by Jessica Aldred and Felan Parker. I’m humbled to be in a collection with so many excellent scholars who were wrangled together by the editors, and I’m particularly proud of the chapter I have in the volume titled “Decaying Bioshock 2: Videogames, Assemblages, Rot.” You can preorder the book on Amazon.

My argument in the chapter is that we can think about games as assemblages, and in doing so, we can think about both how to “decay” them as a mode of understanding. Instead of “reading” or “interpreting” assemblages in the way that you might another medium (or the way that disciplines like literary studies or methods attached to the linguistic turn in philosophy might), instead we should attend to how they cohere and fall apart, both within the 3D environment of the game and in the relation between the human and the game. Despite being originally conceived and written a couple years before the SFFTV piece above, this is another methodological stab at really grabbing at what games are doing.

I don’t think I am interested in arguments about medium specificity, but both of these pieces implicitly argue that games do something different from other media (and produce interlocutors differently than those other media do), and it’s something that I am continuing to do in my dissertation work currently.

This entry was posted in Theory, Video Games and tagged assemblages, bioshock 2, impetus, methods, publications, queers in love at the end of the world. Bookmark the permalink.
Loading Comments...
%d bloggers like this: