Now, after the accident in the Park, Hurricane Clarisse wiped out our facility on Site B. Call is a “act of God”. But; we had to evacuate of course, and the animals were released to mature on their own. “Life will find a way”, as you once so elegantly put it. And by now we have a complete ecological system on the Island! With dozens of species living in their own social groups. Without fences. Without boundaries. Without constraining technology. And for four years I’ve tried to keep it safe from human interference.

Later in the same conversation:

We’ve been on the verge of Chapter 11 ever since that accident in the Park, and there are those in the Company who wanted to exploit Site B in order to bail us out. They’ve been planning it for years and I’ve been able to stop them up until now. But, a few weeks ago a British family on a yacht cruise stumbled across the Island and their wee girl was injured. Oh, she’s fine! She’s fine! But, ah, the Board has used the incident to take control of InGen from me. And now it’s only a matter of time before this “Lost World” is found and pillaged! Public opinion is the one thing that I can use to preserve it! But, in order to rally that kind of support, I need a complete photo record of those animals. Alive and in their natural habitat!

So, you went from Capitalist to Naturalist in just four years! That’s, that’s something!

2.
John Hammond was the idea man behind InGen Technologies, the corporation that cloned dinosaurs from amber in the novel and film Jurassic Park. He’s a pure technological idealist, and he sees the act of cloning dinosaurs as an industrial achievement, a prime method to make money, and as a way of playing God in the most extreme way.

In both the novel and the film, Hammond is portrayed as a pure product of the Enlightenment and the Heideggerian technologist par excellance. The very material history of the world exists to be harnessed and extracted from, and the resulting dinosaurs are fully knowable all the way down to the genetic level. This allows Hammond’s team of scientists to make the dinosaurs themselves wholly dependent on human intervention in their feeding process.

Jurassic Park is an ode to the folly of Hammond’s hubris. Of course the world cannot be contained by his understanding of it; life is in excess of any technological understanding of it or, as Ian Malcolm says, “life finds a way.”

The Lost World extends that critique into a full political line of thought. The protagonists of TLW are preservationists. They release captured animals, sabotage the weapons of dinosaur hunters, and work to heal the wounds of a baby Tyrannosaurus Rex. In the climax of the film, during which a not-baby T.Rex roams through San Diego, Ian and Sarah even lure it back onto a boat and send it off to sea rather than performing the much easier operation of killing it with guns (this isn’t presented as possible in the film but we can easily imagine this happening).

All of that summary is merely to make the point that Jurassic Park and The Lost World as wholes get embodied in John Hammond himself. To be John Hammond is to unleash oneself fully upon the world to make an ideal material and then, once that idea is sufficiently real, fall in love with it so heavily that one will do anything to preserve it.

We want to accelerate the process of technological evolution. But what we are arguing for is not techno-​utopianism. Never believe that technology will be sufficient to save us. Necessary, yes, but never sufficient without socio-​political action. Technology and the social are intimately bound up with one another, and changes in either potentiate and reinforce changes in the other. Whereas the techno-​utopians argue for acceleration on the basis that it will automatically overcome social conflict, our position is that technology should be accelerated precisely because it is needed in order to win social conflicts.

Critiques of accelerationism from the remaining positions that remain from the 20th century left are always dismissed precisely because accelerationism has been constructed as a response to those positions. There’ve been many wars waged on Facebook (the accelerationist battlefield of choice for obvious reasons) over the precise terms and boundaries of what could and should be abandoned and kept (and over the creation of new, sometimes nonsensical, terms for the bricolage projects to emerge in those comment threads).

I probably have sympathy for the conceptual project of accelerationism itself in that there’s active thinking about the actual positive role that technology could have for a revitalized or augmented left. (I think a honing of that project beyond a 1990s-esque project of cybernetic or algorithmic fantasy needs to be performed and it needs to reconcile itself with Nick Land’s explicit racism among other things.) But no matter where I find myself theoretically allied with accelerationism itself, it is hard to watch and listen to John Hammond without feeling like you’re watching a particular version of accelerationism happening onscreen.

Accelerationism ultimately wants to see the social utopian promises of the ultraleft made real through technological processes that can only be made real and material through the idle sacrifice and/or active destruction of the already-oppressed populations around the globe. However, out of that comes a liveable, currently-unthought political formation that delivers an unprecedented form of better life for those that remain and those that come after, ultimately making the future itself a good through which any number of political violences in the present could be justified.

I think about John Hammond having his cake and eating it too. He uses technology to make the dinosaurs materially real after they languished so long in human fantasy in the same way that the leftist utopian impulse does. They live, they find a way to flourish, and then the company is taken from him. John Hammond becomes a figurehead for a freedom fighting movement that can throw the occasional wrench into the plans of InGen, and in the end helps clean up an urban disaster, but is fundamentally powerless.

John Hammond built future and was cut out of it. John Hammond goes from creating the future to making sure that the present is rendered as static as possible to avoid losing ground.

Accelerationists will claim that this is the status of the contemporary left and that new, unthinkable Panther Moderns would never be caught in the same trap. But the new transforms into the comfortable, and only those who are invested in the politics themselves, the (justified) fantasy of the left, would be around to maintain. Instead of cutting locks they maintain the backends of services; instead of freeing the T.Rex baby they hunt down cybercriminals. 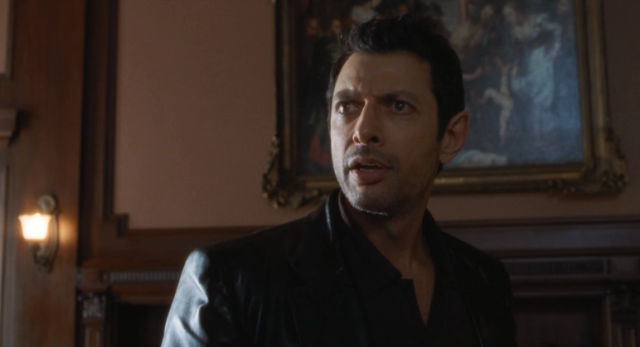 The passion that accelerationism mobilises is the remembrance by the people that a future is possible. In disparate fields — from politics to art to design to biology to philosophy — people are working through how to create a world that is liberated from capitalist incentives. Perhaps most promisingly, the classic dream of Keynes and Marx for the reduction of work and the flourishing of positive freedoms, is making a comeback. In the push for universal basic incomes, and the movements for reduced working weeks, we see the people themselves beginning to carve out a space separate from the wage relation and outside of the imperatives of work. When the media stops reporting the automation of jobs as being a tragedy and starts reporting them as being a liberation from mundane work, we will know that the accelerationist disposition has become the new common sense. We have reached a point in human history where vast amounts of jobs can — and should — be automated. Work for work’s sake is a perversity and a constraint imposed upon humanity by capitalism’s ideology of the work ethic. What accelerationism seeks is to allow human potential to escape from the trap set for it by contemporary capitalism.

Near the climax of The Lost World, when the T.Rex is loose in the city due to the actions of John Hammond’s nephew, Ian Malcolm pats him on the shoulder. “Now you’re John Hammond,” he says.

He radically changed the world and had to live with the consequences of personal ruin and the deaths of civilians who never wanted to deal with these unreal-now-real lifeforms. Having brought them to the world, Hammond’s nephew has to live with the changes that he’s wrought beyond his sloganeering and managerial preparation. He recoils from it, despite the essence of his dreams coming violently true.

He’s eaten by the baby T.Rex at the end.

This entry was posted in Theory and tagged accelerationism, john hammond, jurassic park, the lost world, theory. Bookmark the permalink.
Loading Comments...
%d bloggers like this: