You Buy It I Write It: Bientôt L’été

This is part of my policy of playing anything someone purchases for me. You can read more about that here.

This is going to be shorter than the other posts in this series just because I don’t have very much to say about Bientôt L’été.

I’m not saying that to disparage the game, but instead to reign myself in. Tale of Tales, as you may know, is a artgame collective that creates and releases, well, artgames. These games are always on an accessibility scale–by which I mean that you can play them–but they rarely give any when it comes to their purposeful “artiness.” Those are mixed words, so let me be clear: Tale of Tales create games that are at home being curated and placed in galleries. They also sell those games on Steam sometimes. 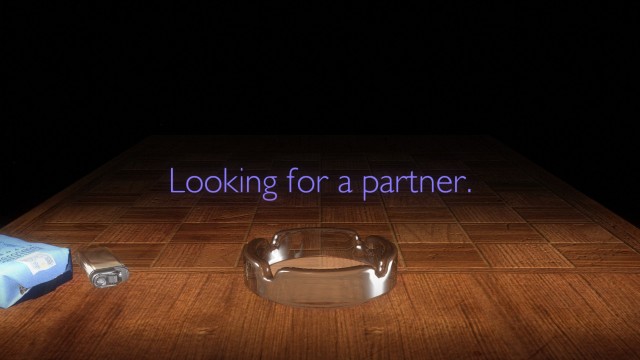 Bientôt L’été puts the player on a beach. There are sometimes objects on that beach. You can touch them and make them part of your character. When you have a few, you can go to a cafe and deploy them in a game of chess that is both visual and verbal–you can smoke and drink through a clash of words.

That’s the basic game, but the turn comes from the construction of the cafe scene. The player sits in one seat; another player sits in the other. This other player is intended to be a human player. They would sit there across from you and you would both fumble with the pieces of language that the game gave you to work with and sometimes things would collide beautifully and sometimes you would be bored.

Here I am, a long time after release, and there’s no one to play with. I can click the substitution button – “Simulation” – but it feels like I’m cheating. When I played the game, I sat and waited a while. I thought that there might be one single person in the world, and we could have a serendipitous connection to each other. Ten minutes gave me nothing.

There’s beauty in that hope. There’s more beauty, maybe more truth, in the fact that there’s no delivery on it. No one is coming. No one is going to come and complete this game for me, with me. There’s just the player and some objects that I can imbue with whatever meaning I want.

3 Responses to You Buy It I Write It: Bientôt L’été