Deep Sleep is a game about a person having a dream. Things connect. Things fall apart. There are mysterious dark forces; a phone whispers over the driving drone of a refrigerator somewhere. Based on the horror games that I have been playing over the past few weeks, this is the state of contemporary horror video games. Deep Sleep doesn’t change any of that.

But it does adapt all of those things into the point-and-click interface, no small feat, and it also won the 10th Casual Gameplay Design Competition (I have no idea what that actually means.) 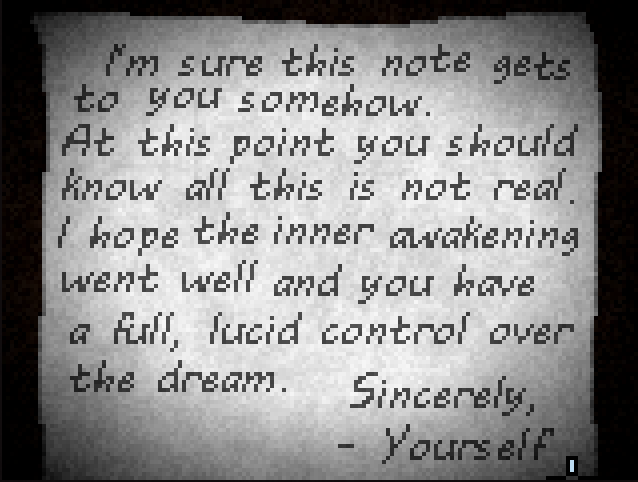 So, frontloaded: the aesthetic is a dream aesthetic. Things change before your eyes. Objects that have no business interacting with one another do, in fact, work together (a net and a hook?). There is no reason for being in a place and doing a thing except for the fact that it is the thing to do at the time (dreams work a lot like games, come to think of it). So Deep Sleep gets to have its creepy aesthetic and strange aural landscape be as weird as it needs to be because we all implicitly understand that dreams are just like that.

On one hand, it feels a little lazy. Of course an inherently unstable state creates unstable aesthetics, which neatly elides into horror (this is why David Lynch can be so goddamn scary sometimes.) On the other hand, that is exactly the point, so I have to commend the designers. It is a dream gone bad; literally a nightmare machine that produces itself in front of you.

That, in essence, is how Deep Sleep works. It makes you believe that everything is going to be okay. It is a liar.

Point and click games often have a difficult time making tension work. Everything works at the same speed as the player, and if that is true, then the player has all the time in the world to make the right decision.

So how does it work? It works by presenting itself as an experience that is centered on the player and then revealing itself as much more complex. Time is not on your side. The world is not meant for you. And it pushes the player away.

It is the last point above that solidifies Deep Sleep in the horror genre. I would even suggest that it is in that deeply-influenced-by-the-19th-century camp of horror games. There is a distinctly Wells/Lovecraft approach to horror here; the world is decentered. There is bigger shit in the universe.

It gave me chills. It made me afraid to move ahead in the dark. It gave me a terrible sense of panic when I knew that I had to click faster than the dark shape could move.

It made me worry.